Brave cops jump on tracks to save elderly

The officials said that the incident unfolded in full public view and was captured in one of the CCTV cameras of the railway station. 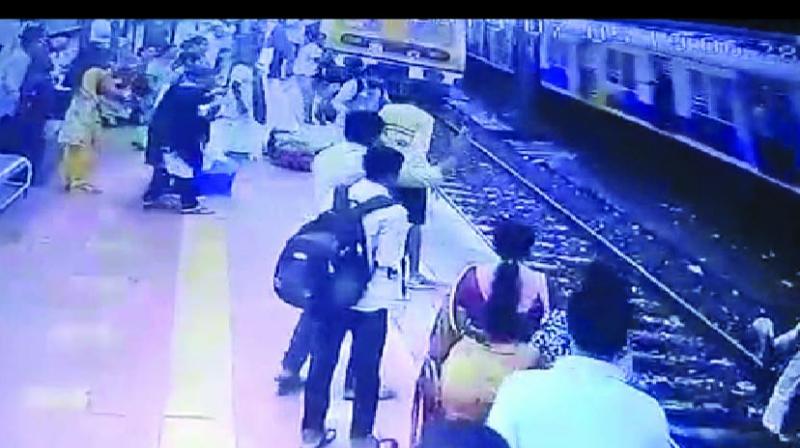 Kamble on track while the train enters the platform

Mumbai: In another incident of  police depicting bravery, a video of an elderly man attempting suicide, being saved in the nick of the time by two Maharashtra Security Force (MSF) personnel risking their lives, went viral. The incident took place at Mumbai Central station on Friday, where the elderly stepped on to the tracks and sat in front of an incoming local train.

The two MSF personnel who exhibited alertness by jumping onto  the tracks to save the 64-year-old Waman Kamble, were identified as Manoj Ghodke and Ravindra Vishe.

The officials said that the incident unfolded in full public view and was captured in one of the CCTV cameras of the railway station.

“While the commuters were unable to understand why he alighted on to the tracks, they were seen raising alarm on seeing him sit on the tracks to get knocked off by the train. The two MSF personnel then arrived and got on the tracks one by one and pulled him off. The motorman also showed alertness and brought the train to a screeching halt metres away,” said a railway police officer.

The elderly was brought to the platform and soon after that the train came to a halt for a couple of minutes before the train traffic resumed, officials said.

The elderly person’s family was informed about the incident and the Railway Protection Force (RPF) personnel summoned them.