The vehicular movement was affected for at least two hours. 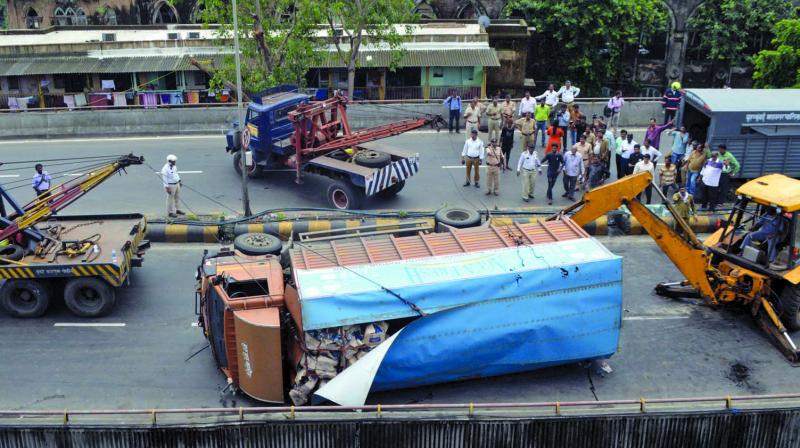 A truck carrying mineral water bottles overturned on the Lalbaug flyover on Friday. The flyover was closed for vehicles after the accident. (Photo: Asian Age)

MUMBAI: A truck overturned on the Lalbaug flyover on Friday morning after the vehicle, which was carrying packaged water bottles, allegedly hit an electric pole that collapsed due to the impact of the collision on Dr BA (Baba Saheb Ambedkar) Road, Byculla. This affected the vehicular movement in that area for at least two hours. The traffic got affected as the flyover was shut and the authorities had got cranes to remove the truck.

According to the sources, the incident took place at around 9 am, when the truck was travelling on the north-bound lane towards Dadar. The driver allegedly lost control of the vehicle’s steering wheel halfway on the flyover and rammed into an electric pole, causing it to overturn. Traffic police personnel immediately arrived at the spot and diverted the incoming traffic from below the bridge till the truck was moved two hours later, at 11 am.

A traffic police official said that the wet roads on the flyover due to rains might have caused the accident, but further probe into the incident would provide a clear picture of the accident cause. A motorist alerted the traffic control room about the incident at 9:15 am, following which a team of Mumbai fire brigade and traffic police were dispatched to the spot. The truck that was carrying Bisleri water cans, which had scattered on the road after it overturned.

Two persons, believed to be the truck’s driver and helper, were injured and rushed to Jamshedjee Jeejeebhoy (JJ) Hospital for treatment.