During the interrogation, Kadam revealed that he wanted to sell the snake for monetary gain. 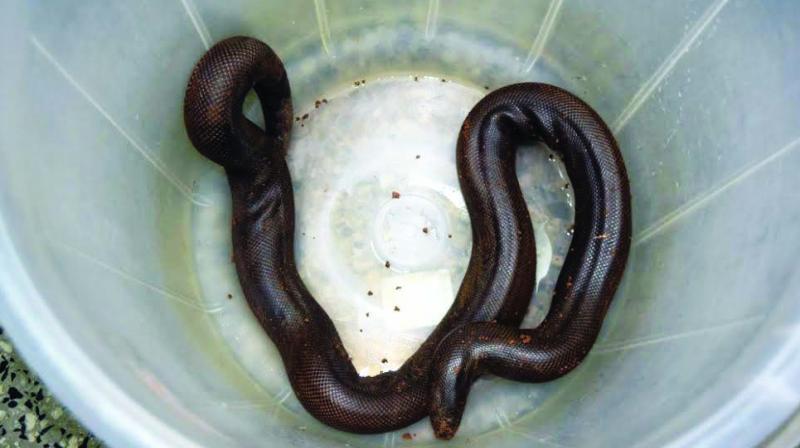 The species is protected under the Schedule IV of the Wildlife Protection Act, 1972.

Mumbai: The Wildlife Crime Control Bureau (WCCB) and the state forest department arrested a 43-year-old Raigad resident on Wednesday for selling a red sand boa, a protected species under the Schedule IV of the Wildlife Protection Act, 1972.

The accused, Mahadev Sitaram Kadam, was produced in front of the Panvel magistrate court on Thursday.

The western region office of the WCCB, situated in Navi Mumbai had received a tip-off about the possession and sale of a live red sand boa. According to the information they had received, a resident of the Potlaj village in the Sudhagad tehsil of Raigad district was to sell the serpent on Wednesday. This prompted them to lay a trap to apprehend the person along with the snake.

Kadam has arrived on the spot at around 7.30 pm with a coloured polythene bag. The teams stationed at the spot had spontaneously rounded the person, asking him to open the bag and show them the contents. On opening the bag, the officers found a 20-litre empty water can cut at the neck and filled with red soil. The snake was hidden in the soil.

During the interrogation, Kadam revealed that he wanted to sell the snake for monetary gain.

He has been booked under sections 9, 39, 48 (a) and 51 of the WPA and was later produced before the Khalapur court.