A division bench of the high court was hearing the PIL filed by Mohan Bhide a chartered accountant and professor with Kapasi-Bhide classes in Mumbai. 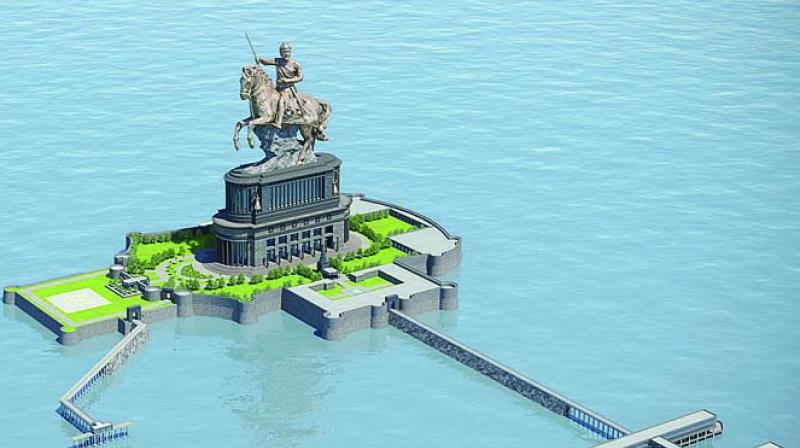 The proposed Shivaji Memorial to be built in the Arabian Sea.

Mumbai: Bombay high court on Thursday directed the state government to file a detailed affidavit in response to a public interest litigation (PIL) against proposed construction of Chhatrapati Shivaji Memorial in the Arabian Sea. When completed, the statue will be the tallest in the world at 192 metre. The court said that various points had been raised in the petition, including expenses to be incurred on construction of the memorial, which the state needed to respond to. The court has given three weeks’ time to the state to file its reply.

A division bench of the high court was hearing the PIL filed by Mohan Bhide, a chartered accountant and professor with Kapasi-Bhide classes in Mumbai.

The petition sought that the state government decision should be set aside. It further sought interim injunction for the state not to carry on any work or spend any money till the court decided on the matter. The petition said that the state government was facing debt of crores of rupees and major issues like drought, load shedding, construction of super-specialty hospitals in many districts, unemployment, malnutrition, and construction of dams and new schools needed to be seen on a priority basis as compared to construction of the Shivaji Memorial. The petitioner called the project illogical and uncalled for expenses.

Bhide’s lawyer Ketan Parikh informed the court that in constructing the statue worth `3,600 crore, `77 crore had been spent on the bhoomi pujan alone. The petitioner said that the state government was already facing a financial crunch and last year, it had declared 25,000 villages as drought-prone area.

People wanted a better standard of living and better amenities to live which needed to be addressed first. The petitioner also said that Shivaji Maharaj had constructed 370 forts in his lifetime but after 70 years of independence, no government had bothered to take care of them. Most of these forts were in a dilapidated condition. The petitioner asked why a new memorial was needed when the government was unable to maintain the old forts and caves.

The petitioner alleged that the purpose of announcing this project and conducting inaugural ceremonies was nothing but a political stunt and cheap publicity ahead of BMC elections.