Narrow lanes and haphazard parking proved to be hurdles in fire engines reaching the spot. 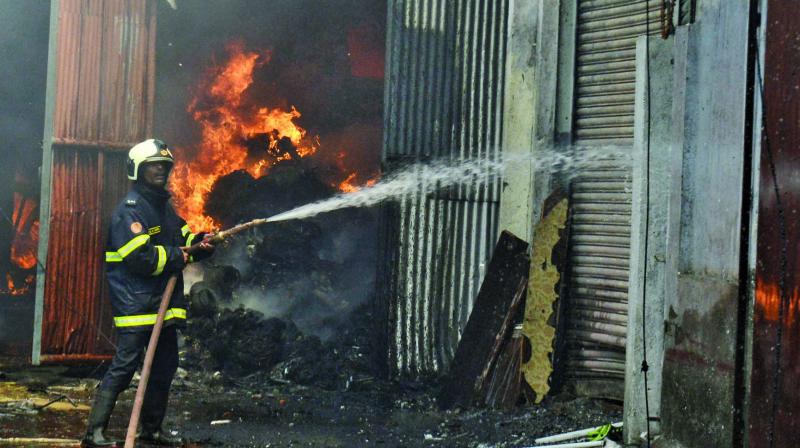 A fireman attempts to douse the flames. (Photo: Rajesh Jadhav)

Mumbai: An entire godown was gutted down in a major fire at Kalachowkie on Tuesday. While there were no injuries or casualties, the fire has highlighted the issue of godowns in residential areas in the city.

According to fire officials, the fire broke out about noon in a godown of the Eastel Metal Company located at Dattaram Lad Marg. The godown had a large stock of electronic material, printing rolls, paint drums and furniture stock.

“The fire was confined to a ground-plus one floor warehouse. It spread rapidly due to the presence of combustible material,” said a fire official.

After reaching the spot, the Fire Brigade declared it a level three fire. However, it was soon upgraded to a level four fire. The fire was so huge that its fumes could be seen from south Mumbai.

Narrow lanes and haphazard parking proved to be hurdles in fire engines reaching the spot. As the godown was surrounded by residential buildings, the firemen evacuated more than 200 people and shifted them to a safe place, said fire officials.

Sixteen fire tenders and 12 jumbo water tankers were used to douse the fire, which was brought under control by 2 pm. However, the cooling operations went on till the evening. “The cause of the fire would be ascertained only after a proper inquiry,” said the fire official.

Following the blaze, locals have demanded that godowns should be shifted away from residential areas. Local Shiv Sena corporator Anil Kokil said, “There are six to seven godowns in Kalachowkie. It is learnt that they do not have proper permission as well as fire fighting system. Despite making several complaints, no action has been taken against them.”