Defence ministry yet to decide on a bid to convert INS Viraat into an entertainment hub. 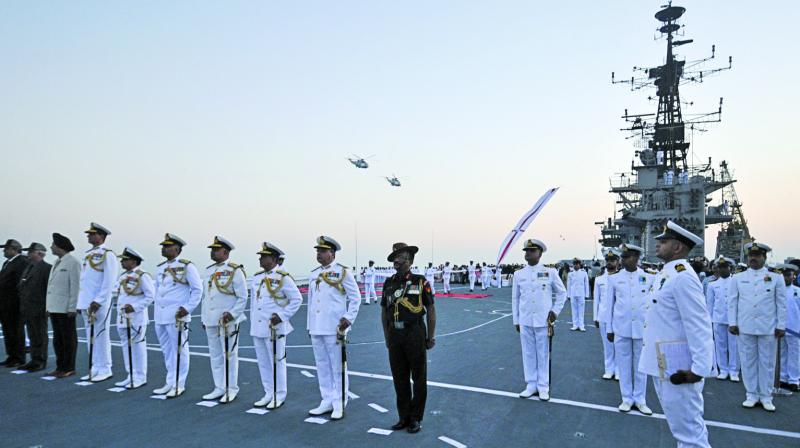 Naval officers at the decommissioning ceremony of INS Viraat at the Naval dockyard. (Photo: Debasish Dey)

Mumbai: “INS Viraat was the happiest ship to work on; a place where my family life commenced and my son was born. She will always remain close to my heart,” said Commander Prem Kumar, who was among the first batch of airmen who served on the ship during its early years. The longest serving ship in the history of the Indian Navy (30-year-old) was decommissioned at 6.45pm on Monday. The Navy is now left with no aircraft carrier.

Earlier known as HMS Hermes, INS Viraat was in the Royal Navy from 1959 and served the British Army.

The Indian Navy purchased it at a cost of $65 million in the late 80s and it was re-commissioned on May 12, 1987. On the day of decommissioning however, Vice-Admiral Girish Luthra said that the defence ministry was yet to take a decision on a proposal from the

Andhra Pradesh government to convert INS Viraat into an entertainment hub at Visakhapatnam. The Navy chief, however, declared that if the deal with Andhra Pradesh or any other interested state did not work out, it would use the aircraft carrier as a diving spot.

Andy Trish, one of the officers who worked at HMS Hermes, said that it was commendable that the Indian Navy had maintained the aircraft carrier well and it had to
continue like that. Mr Trish, who had celebrated his 19th birthday on board, said that he had been on the ship during the Falklands War.

“We would want to see the aircraft being converted into a maritime museum. The final decision of its fate would however take around six months,” stated Mr Luthra, adding that the defence ministry would not provide financial assistance to any state for constructing the museum. Navy too wants to have an early decision to avoid INS Viraat meeting the same fate as its predecessor INS Vikrant, which was finally disposed in a scrap yard.