Chef Vishnu Manohar from Nagpur, who had earlier attempted a world record by preparing 3,000 kg khichdi, prepared it in a single vessel. 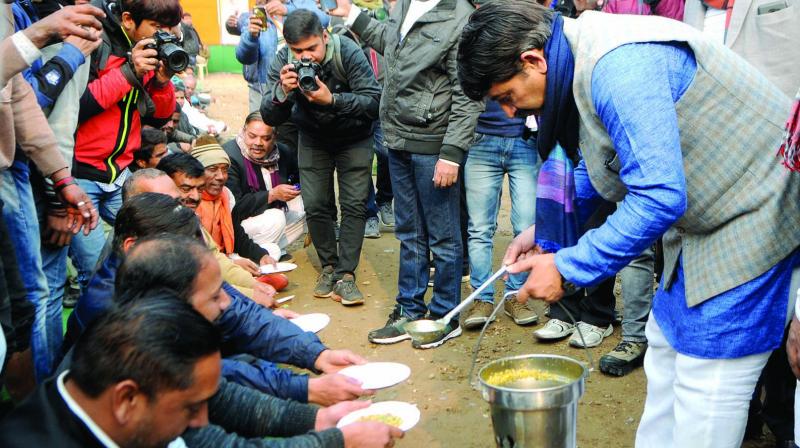 New Delhi: In a bid to woo dalit voters and create a world record, BJP started cooking khichdi for its ‘Bhim Mahasangam Vijay Sankalp’ rally at Ram Lila Maidan on Sunday, where 5,000 kg of “Samrasta Khichdi” was cooked and served, party leaders said.

The event was a gathering of people from backward classes and was organised by the Delhi BJP. BJP MP and Dalit leader Udit Raj was conspicuous by his absence at the event. However, the party leaders said that not much should be read into his absence.

The 5,000 kg “Samrasta Khichdi” was cooked in one utensil with rice and lentils collected from around 3 lakh Dalit households in the national capital with an aim to set a world record.

Chef Vishnu Manohar from Nagpur, who had earlier attempted a world record by preparing 3,000 kg khichdi, prepared it in a single vessel.

“I want khichdi to be declared the national food of India. Every country has its own dish — sushi is of China and pizza of Italy — but India does not have its own dish,” Mr Manohar said.

“The representatives from the Guiness Book of World Records were here and 5,000 kg khichdi was prepared, which was eaten by 25,000 persons,” Delhi BJP SC Morcha president Mohan Lal Gihara said.

Cries of Jai Bhim, Jai Hind, Bharat Mata Ki Jai resonated at the Ramlila Maidan where party leaders said the event was more of a “harmony building” exercise rather than a political event to garner votes ahead of the Lok Sabha elections.

Taking a dig at Congress and AAP, he said, “Arvind Kejriwal and Rahul Gandhi, are you upset about the event? We had even invited every political party to be a part of the event. If they were concerned about harmony, Mamata Banerjee, Kejriwal, and others would have come,” he said. Union minister Harsh Vardhan said that by collecting a handful of rice and half a handful of lentils, the Delhi BJP is sending out a strong message of ‘unity in diversity.’

He said it was a befitting reply to those who divide the country on the basis of caste, region, and religion.