The fire department has sent notice to the owner of the building to remove the offices and clear the basement area. 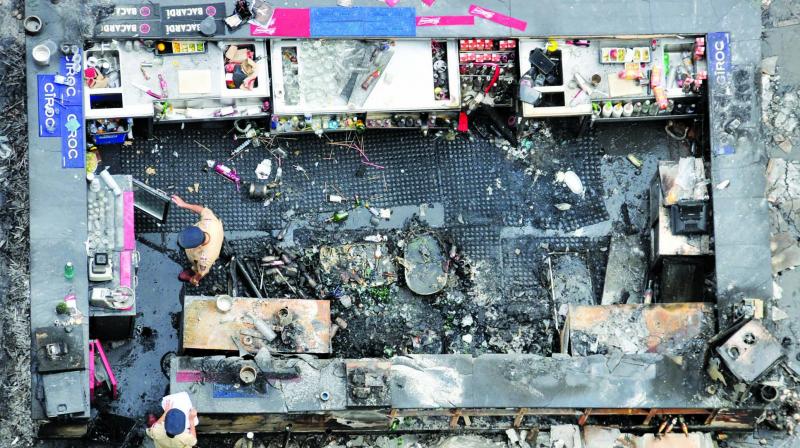 The report that came out on Friday revealed that the flying embers of hookah from Mojo’s restaurant are the probable cause of the blaze.

Mumbai: Trade House building which housed both roof top restaurants,  1 Above and Mojo’s Bistro, at Kamala Mills was found housing illegal offices in the basement. Mumbai Fire Brigade in its probe report has raised the point of non-permitted activities in the basement.

The fire department has sent notice to the owner of the building to remove the offices and clear the basement area. Also, the fire officials found out that the fire escape balconies on all the floors are encroached.

“During the investigation of fire tragedy, an inspection was carried out of the entire building and found several structural irregularities. Among which, the basement was found to be used for non-permitted activities. The basement was divided using a partition and offices were operating in it. We have sent a notice to the owner to clear the basement area,” said a senior fire official, who was in-charge of the investigating the blaze at Kamala Mills compound. The investigation revealed several irregularities on part of the entire building in terms of fire safety and other violations.

Along with encroached basement, the fire officials also found that the fire escape balconies in the building on all floors are encroached, thereby blocking the escape route towards the staircases. It is to be noted that apart from restaurants, the building houses several media offices.

“These balconies were encroached and were used as storage. We have recommended removing the encroachments,” added the official. Other irregularities include, absence of exit signage on the premises, use of combustible materials such as plywood, cloth material, furniture etc.

The report that came out on Friday revealed that the flying embers of hookah from Mojo’s restaurant are the probable cause of the blaze.