The MMRDA had started the construction work last year. The memorial of Dr Ambedkar will be a 350 feet bronze statue. 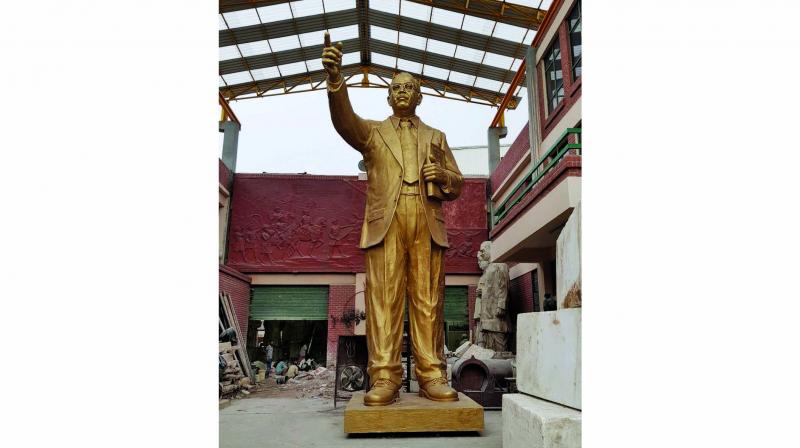 A three-member committee has suggested some changes in the two prototypes, designed by sculptor Ram Suthar, for Dr Babasaheb Ambedkar memorial.

Mumbai: A three-member committee has suggested some changes in the two prototypes, designed by sculptor Ram Suthar, for Dr Babasaheb Ambedkar memorial. One of them will be finalised in the coming days.

“Two prototypes of 10 and 25 feet have been submitted till now. The committee has suggested a few changes in these prototypes. A final decision will be taken after getting the green signal from the committee,” said a Mu-mbai Metropolitan Reg-ion Development Author-ity (MMRDA) officer.

Only 20 per cent of the work on the memorial — to come up on Indu Mill land — has been completed so far, the officer added. The MMRDA had started the construction work last year. The memorial of Dr Ambedkar will be a 350 feet bronze statue.

As per the design, the memorial will have a two-level underground basement parking facility where nearly 450 vehicles can be parked at once. However, only 6 to 7 tourist buses will be allowed to park. “Nearly 90 per cent of the excavation work for one parking area has been completed. The shore piling method is used for excavation,” the officer added.

A circular ramp will be installed to access this statue. The memorial will have exhibition halls, parikrama path which will be connected to Chaityabhoomi, where Dr  Ambedkar was cremated.

Besides this, the memorial will also have a research centre, lecture halls, a library, conference halls, a meditation centre, auditorium with a capacity for 1000 people, landscaped gardens. The MMRDA will spend approximately Rs 709 crore to execute the project.