Mumbai witnessed a decline of five degrees in temperature on Tuesday, with a minimum temperature reaching up to 22 degrees. 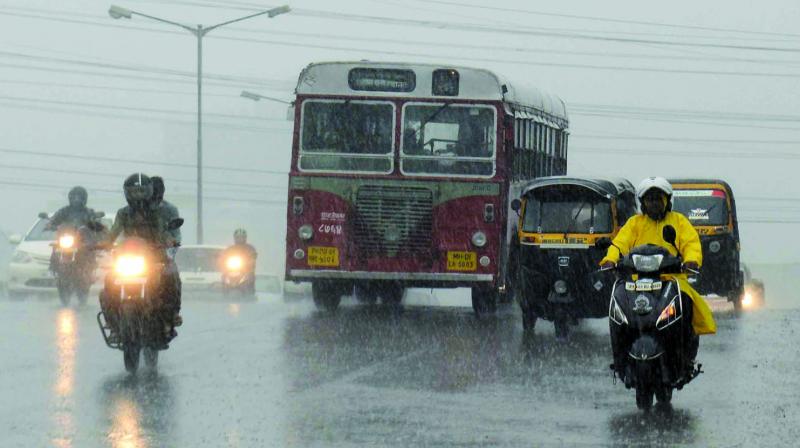 The highest rainfall in December before Tuesday was recorded in 2014 with 1.5 mm. (Photo: Rajesh Jadhav)

Mumbai: The weather conditions are likely to be normal in Mumbai on Wednesday with light rains expected in isolated parts, according to the Indian Meteorological Depar-tment (IMD). Cyclone Ockhi, which created havoc in Tamil Nadu, Kerala and Lakshwadeep, was expected to weaken further and cross south Gujarat near Surat as a depression by Tuesday night. Mumbai witnessed a decline of five degrees in temperature on Tuesday, with a minimum temperature reaching up to 22 degrees.

With 11 mm rainfall recorded between 5:30 am and 8:30 am on Tuesday owing to the Ockhi cyclone, the rains broke the December record in a decade. The highest rainfall in December before Tuesday was recorded in 2014 with 1.5 mm. The Santacruz and Colaba observatories recorded 25.8 mm and 47.4 mm rainfall till 2:30 pm. The IMD and National Disaster Management also issued warning to fishermen in east and west coasts to not venture into the sea. “Even as Ockhi weakens over the Mumbai coast, the sea condition will be rough to very rough along and off north Maharashtra during next 18 hours,” said Ajay Kumar, an IMD scientist, West Region.

Meanwhile, the Brihanmumbai Municipal Corporation (BMC) had estimated a high tide of up to 5 meters at 2 am on December 6. “A high tide of 4.22 meters at was recorded at 12:45 pm on Tuesday. After another high tide of five meters in the midnight, there will be a gradual decline in the tide level to 4 meters again,” said Tanaji Kamble, deputy Public Relation Officer of BMC.

As of now, no reports of missing or stranded boats have been recorded, however, according to the State Disaster Management Cell department, out of the 2,600 boats that were called off Maharashtra coast, one is missing and cannot be tracked. The IMD officials have maintained that the intensity of the cyclone will remain less severe before moving to Gujarat.

Although Cyclone Ockhi did not have severe effect on the city, the fishermen community claims that the fish business has been hit largely. Akhil Maharahstra Machhimaar Kruti Samiti (AMMKS), an umbrella body for fishermen stated that due to the cyclone, they had lost Rs 10 crore business in the last two days as they could not venture into the sea.

“The fishing business across Mumbai comes up to Rs 5 crore everyday. The state has issued an advisory to not go into the sea,” said Damodar Tandel, President of AMMKS. The fishermen body fear that the city will not get fish for the month due to effect of the cyclone.