Police, BMC prepare for incoming crowd in city against any untoward incident

Taking into consideration the Ockhi cyclone warning, fire brigade officers and the NDRF will be deployed at several places across the city. 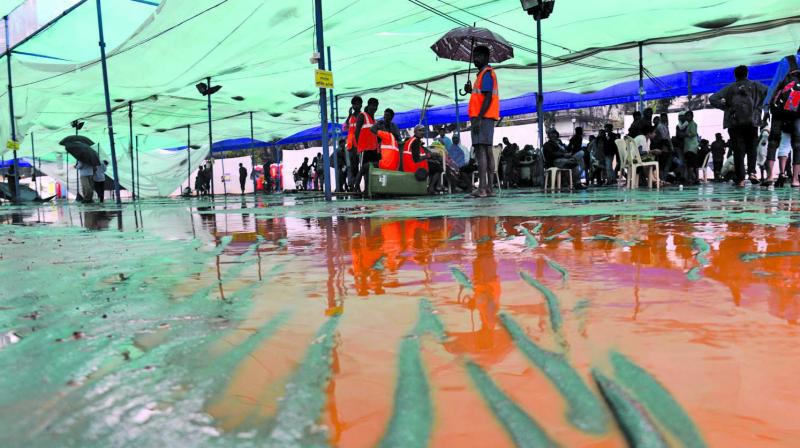 The pavilion set up at Shivaji Park in Dadar. (Photo: Rajesh Jadhav)

Mumbai: On account of Dr Babasaheb Ambedkar’s 71st death anniversary to be observed on Wednesday, the Mumbai police and BMC have made arrangements to manage crowds and avoid any untoward incident.

Taking into consideration the Ockhi cyclone warning, fire brigade officers and the NDRF will be deployed at several places across the city. Police teams including the State Reserve Police Force (SRPF) and Quick Response Team (QRT) may also be deployed.

One lakh followers are expected to visit the city on the occasion of the death anniversary Dr Ambedkar and many of them have already arrived. The police has set up two help desks near Dadar’s Chaityabhoomi where followers of Dr Ambedkar will gather to pay homage. Signboards will also be put up to guide persons in case of emergency.

Along with the Mumbai police, special teams including the SRPF, Riot Control Police, QRT and Bomb Detection and Disposal Squad (BDDS) may also be deployed to tackle possible terror threats. Around 900 women constables will be deployed to keep tabs on criminal activities targeting women.

Deepak Deoraj, deputy commissioner of police (operations), said, “Arrangements have been made. CCTV camera units have been installed all over the city to monitor happenings.”

Due to the heavy downpour, a pavilion where booklets on Dr Ambedkar were to be launched collapsed at 10 am at Shivaji Park on Tuesday, injuring three people. The victims were admitted to Sion Hospital, and are said to be out of danger. The venue was shifted to the mayor’s bungalow.