K.S. Somasundaram, who is the state party secretary of AIADMK, conducted a main puja at a Ganesh temple in Dharavi. 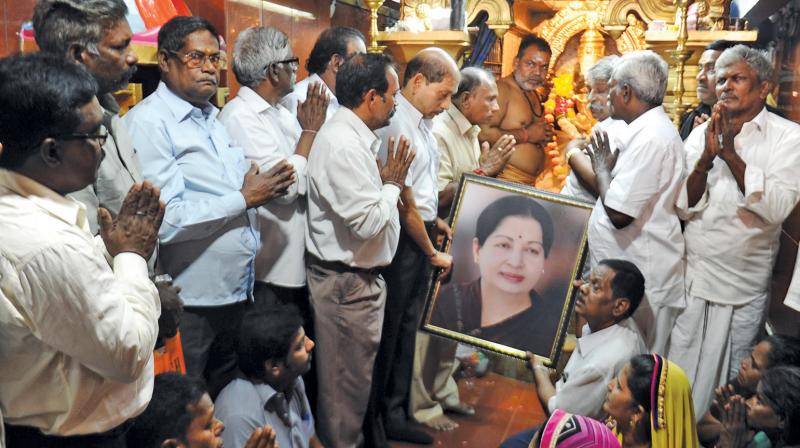 Mumbai: Scores of Tamilians from Mumbai boarded southbound trains on Monday to reach Chennai, as panic spread among this community following the demise of All India Anna Dravida Munnetra Kazhagam (AIADMK) leader and Tamil Nadu chief minister J. Jayalalithaa’s on Monday at 11.30 pm. Earlier in the day, all members of Mumbai’s branch of AIADMK held pujas and said prayers at 65 temples and churches across the city, to seek divine intervention for their leader’s speedy recovery following a cardiac arrest on Sunday.

K.S. Somasundaram, who is the state party secretary of AIADMK, conducted a main puja at a Ganesh temple in Dharavi, which is home to many Tamilians. Prayers were also held at the Siddhivinayak Temple, as well as St Michael’s church in Mahim.

R. Vasundaran, who lives in Matunga, said, “Two of my friends boarded the 2 pm Chhatrapati Shivaji Terminus (CST) to Chennai train on Monday. We do not usually travel by the general compartment, but Monday has been an exception. I wanted to join them, but my kids have gone to school. I must wait at least for them to return, and I may take an evening train.” People boarded the general compartment of these trains, as they did not want to waste time booking tickets. They are willing to pay a fine when the ticket checker spots them without a ticket.

Mr Somasundaram said, “We can say at least 50-60 people boarded the afternoon daily train from CST to Chennai. Others are all looking for trains that go from Mumbai towards the south. People will sell their jewellery if they have to, to gather money and visit Chennai to see Amma.”

Mr Somasundaram has been urging Mumbai’s Tamilians to stay in the city, as no one is allowed inside Apollo Hospitals in Chennai, where Jayalalithaa was undergoing treatment, prior to her demise. All the 65 party offices of the AIADMK held pujas at nearby temples, and the party estimates that at least 100 people were present at each venue. The venues included temples in Thane, Ambarnath, Kalyan, Dahanu and Malad.

Chandrashekhar, who is AIADMK’s party president in Maharashtra, prayed at Mahim Church on Monday. Whereas, Chitra Lakshman, who is the president of the Maharashtra AIADMK’s women’s wing, said, “All the Tamilian women I know gathered at separate temples and prayed together. We decided to start fasting from Monday until Amma recovers. None of the women have eaten since last night.”