The Navy described the accident as “unprecedented and sad”. 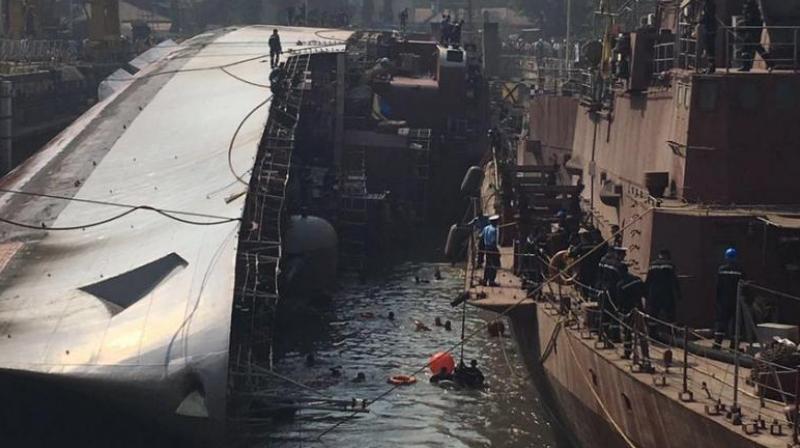 The mast of the ship hit the dockyard ground. (Photo: Twitter)

Mumbai/Delhi: Two sailors were killed and 15 others injured when India’s prized warship INS Betwa tipped over and crashed to its side while undergoing refit at Mumbai’s Naval Dockyard on Monday, a day after the Navy Day celebrations.

The Navy described the accident as “unprecedented and sad”. While a court of inquiry was ordered and damages were being assessed, sources said the accident was a severe one with the potential to “cost the ship”.

Indian Navy’s spokesperson Captain D.K. Sharma said, “Two sailors have succumbed to their injuries after the mishap that took place at 1.50 pm. INS Betwa, a frigate of the Indian Navy, was in the process of undocking when it slipped from its dock blocks and tilted.” Those injured in the mishap were rushed to Naval hospital INHS Asvini for treatment.

The 3,850-ton ship was lying on its side at the naval dock till reports last came in. Sources said that the mast of the 126-metre-long ship touched the ground. The undocking operation is a complex and precise one, meant to dock the ship in its designated slot in the dockyard.

“There would be people working on upper decks for undocking. There could be cases of drowning because water’s depth there would be six to seven meters,” source said.

Another source from the Navy, who was present at the dockyard when INS Betwa flipped over, said that at the time of refitting a frigate always stands on artificial support.

“The support gave away and the ship rotated 90 degrees. Refitting always takes place on a dry ground… for refitting, we establish a platform on the ground to give support to the ship. As ships are triangular we place support below the nose. While sending it back into the sea, we remove this support and the ship starts sailing. In this incident, the support lost its balance,” the source explained.

Commissioned into the Navy on July 7, 2004, INS Betwa is the first Indian warship to successfully integrate Indian-made systems with foreign ones. The frigate is armed with two Sea King helicopters, Israeli Barak and Russian Klub missiles, besides a 76mm gun and anti-submarine torpedos among other weapons systems.

As the ship was undergoing refit, neither the choppers nor the weapons systems were onboard. “Water is filled in the dry dock to float the ship. The level of water inside and outside the dock must be the same. If the heeling over has ruptured the hull, which is underwater, water ingress would have been there. One has to wait for details”, Vice Admiral Shekhar Sinha (retired) told this newspaper.

This is the second time INS Betwa has been involved in a mishap. In January 2014, the ship ran aground after hitting an unidentified object near Mumbai’s Naval base. The sonar system broke leading to faulty readings.