Fadnavis will be CM, reiterates BJP 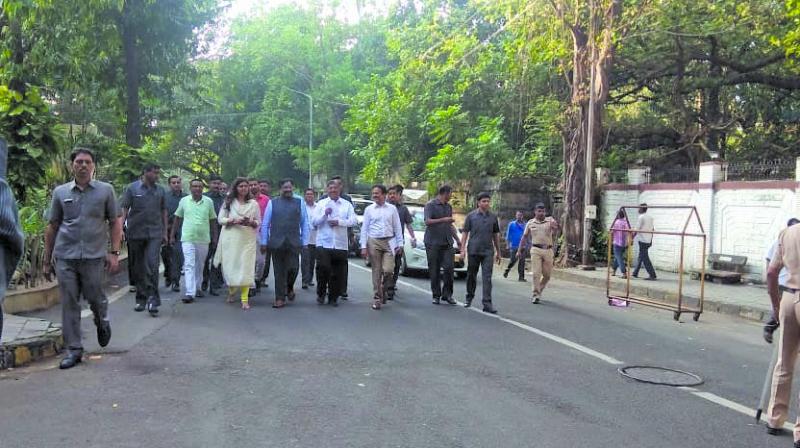 The BJP core committee members coming out of the meeting. (Photo: AA)

Mumbai: Even as the Shiv Sena termed Devendra Fadnavis as an “outgoing chief minister”, the Bharatiya Janata Party (BJP) on Tuesday reiterated that Mr Fadnavis would lead the next state government.

After the meeting, Mr Patil claimed that a new government would be formed in the next couple of days. “Respecting the mandate given to the grand alliance by the people of the Maharashtra, we will form the next government under Devendra Fadnavis’ leadership,” he said.

Talking about alliance partner Shiv Sena, Mr Patil said that the Uddhav Thackeray-led party had not sent any proposal on forming of the new government.

Mr Patil said, “The Shiv Sena has not given any proposal. Sena should send its proposal as soon as possible. The BJP is ready to hold the discussion over the proposal. The BJP would like to form the government by taking everyone into confidence.”

Interestingly, both parties have only been issuing statements through the media, while not holding any discussions with each other.

A meeting of BJP-Sena leaders was supposed to take place last week, but Mr Thackeray told his partymen not to attend it, as his party continued to claim the chief minister’s position.

A BJP leader, who had attended the meeting, said, “If the Shiv Sena does not send a proposal in the next two days, the party is prepared for president’s rule in the state.”

BJP leader Girish Mahajan , considered close to Mr Fadnavis, said that his party was not ready to discuss sharing of chief minister’s post with the Sena. Mr Mahajan claimed that Mr Fadnavis would once again become the CM.

Rejecting the Sena’s demand of a ‘black-and-white assurance’ before talks over forming the government begin, Mr Mahajan said, “We have decided that Mr Fadnavis would be the chief minister for the next five years. BJP is ready to hold talks with Sena over other portfolios.”

The BJP won 105 seats in the recently-concluded Assembly polls.