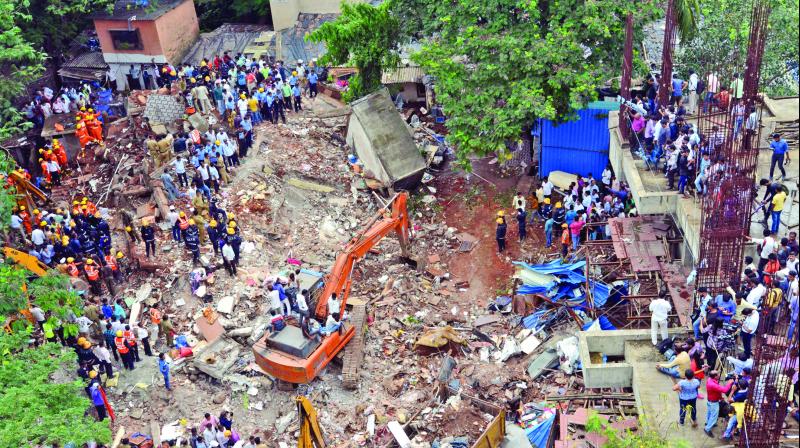 Mumbai: The statements of workers in the chargesheet filed by the Parksite police in the Sai Siddhi building collapse at Ghatkopar, which led to the death of 17 residents on July 25, states that main accused Sunil Shitap allegedly left from the spot immediately in his car, even as workers propped up a tilted load bearing column with girders. Minutes after he left, the building came crashing down even as the workers tried to warn the residents to vacate it as it had started tilting.

Another resident who exited the building moments before Shitap said that though he alighted from his first floor flat before him, the fact that he exited the building after him indicates that Shitap may have seen the propping work but did not bother to warn other residents about the imminent danger, which resulted in their demise when it collapsed minutes later. Shitap is in judicial custody after his arrest by the police on charges related to culpable homicide not amounting to murder.

The statements of workers in the chargesheet says that around 10.30 am, they noticed that a column from which the plaster had been removed had tilted and the iron rods had also come out.

They immediately propped it with girders, which took around 15-20 minutes. But soon after they finished putting the props, they noticed

The chargesheet also had the statement of Lalchand Ramchandani (67), a resident of the fourth floor of the building, who said that while he was alighting and reached the second floor, Shitap exited from his flat and even said ‘hello’ to him.

However, Shitap left in his car a few moments after Ramchandani left in his vehicle. This according to Birendra Singh another surviving resident said indicates that Shitap may have gone to see progress of the work before leaving in his car.

“The CCTV footage of the collapse shows that moments after Shitap left in his car, the workers came out and asked residents to vacate the building. Assuming that Shitap left despite having knowledge of the tilted columns hints at the fact that he was not bothered about the safety of the residents,” said Singh.