Will install only at places with cops, responsible societies. 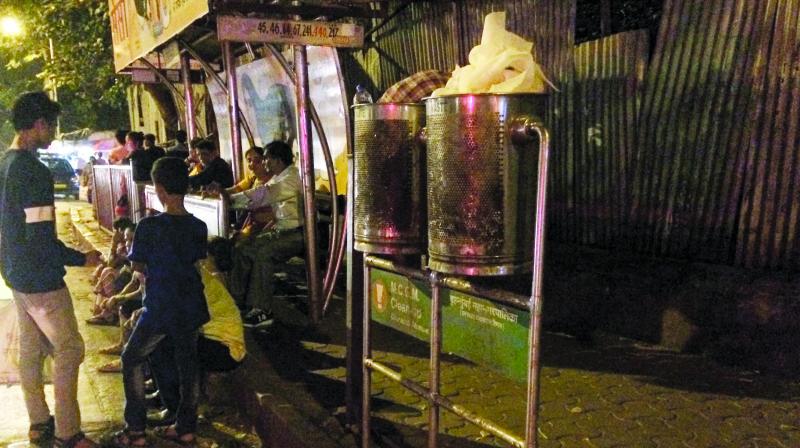 The dustbins installed at a bus stop near Sharda Talkies in Dadar. (Photo: Shripad Naik)

Mumbai: While the Brihanmumbai Municipal Corporation (BMC) is striving for a zero-garbage city, it is facing a bizarre problem in the form of metal dustbin thefts. Worried over the issue, it has now decided to install metal dustbins only near those housing societies, which are willing to take up their responsibility.

To maintain cleanliness, the BMC in 2013 had decided to procure 5,000 metal dustbins, made up of stainless steel, iron and fibre, for city roads. Of them, 4,980 dustbins were installed at various places like bus stops, railway stations, colleges, shopping malls, zebra crossings, markets and tourist spots.

However, civic officials have found that dustbins, especially metal ones, are being stolen from several public places. Taking a cue from this, the BMC has decided to supply them to the housing societies and Advanced Locality Management (ALM) groups, which will give assurance that they will look after them. The ALMs are citizen groups that work to create awareness about civic issues.

According to civic officials, the stainless steel dustbins will be installed at municipal offices, gardens and hospitals, where security guards would be available. They will also be installed on public roads if housing societies or ALMs in nearby areas show willingness to maintain them.

“Looking at the past experience, the dustbins will be installed only at places, which are suggested by ward office and corporators. In addition to this, they will also be placed at housing societies and ALMs, which are ready to maintain them. This will ensure there is no thefts and damages to these dustbins,” said a senior civic official.

Officials said, the metal dustbins are stolen by thieves, who then sell it into the scrap market, as they fetch a good price.

“The BMC should file a police complaint about the theft of dustbins. Action should also be taken against scrap dealers who purchase them,” said civic activist Nikhil Desai.