Police imposes Section 144 of CrPC in vicinity of colony. 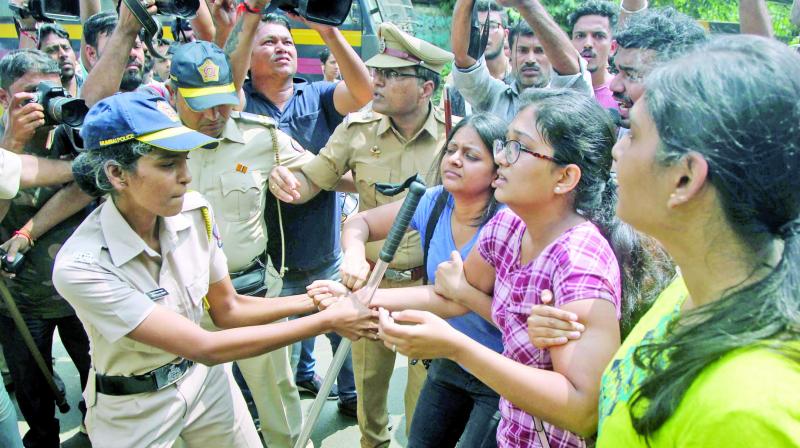 A demonstrator is detained by the police during the protest against tree cutting at Aarey Colony on Saturday. (Photo: Mrugesh Bandiwadekar)

Mumbai: Mumbai police on Saturday imposed Section 144 of the CrPC in Aarey Colony and its surrounding areas as protesters escalated their fight, a day after the court gave its nod to the felling of over 2,500 trees for the Metro project.

Tribals and activists compared the situation at Aarey with the Kashmir clampdown after 38 people were arrested and 60 more were detained by the police. All those arrested were booked under non-bailable sections and produced before a court, which remanded them to judicial custody.

Around 1,800 trees have already been axed till Saturday afternoon, according to MMRC. Following the high court verdict on Friday, the MMRC started tree-cutting at night, which was resisted by hundreds of citizens and activists. Police detained around 60 persons in Aarey police station, and some more were detained in Varnai and Dindoshi police stations.

Tribals of Aarey Colony alleged that they have seen such treatment and force for the first time.

Prakash Bhoir, a tribal whose wife was arrested, said, “Over a night, Aarey was turned into Kashmir, all entrances to Aarey were blocked and there was a heavy police presence throughout the day. It felt like a curfew like situation. My wife had only gone to protest against cutting of trees, yet she is under the bars and may get relief only after Monday,” he said.

Sandhya Jadhav, who was waiting for her 22-year-old nephew to be released, said that police had booked even college students under non-bailable sections of IPC. “My nephew was coming from his college and he joined the protest to save trees from being cut. Yet he has been arrested and being harassed like a criminal,” she said.

Some protestors alleged that they were manhandled and pushed into vans, however, Mumbai police denied any kind of high-handedness. “The situation is peaceful now. All due process of law was followed while handling the situation. We have arrested some protesters as they had beaten policeman deployed there,” said an official.