Yuva Sena chief Aaditya Thackeray lashed out at the Mumbai Metro Rail Corporation (MMRC) for “slyly and swiftly cutting down an ecosystem in Aarey”. 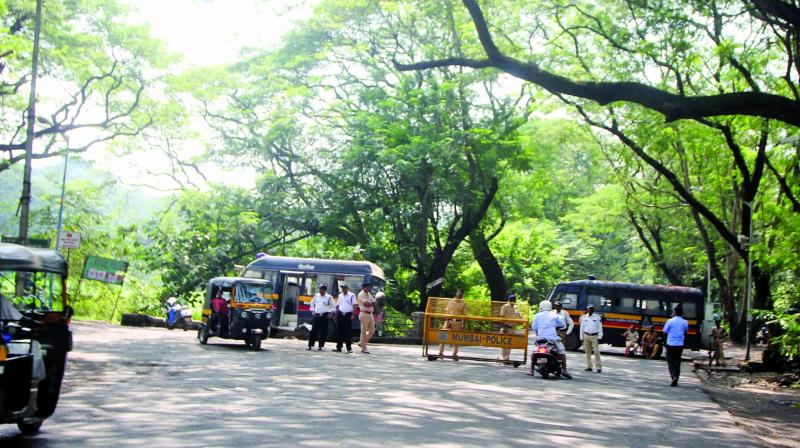 Police cordon off the area following a protest against the tree-cutting, being carried out for the Metro car shed project, at Aarey colony in Mumbai, Saturday. (Photo: Mrugesh Bandiwadekar)

Mumbai: The axing of trees at Aarey has caused quite a stir amongst political parties, which are busy pointing fingers at each other. Lashing out at its ally BJP, Shiv Sena leader Uddhav Thackeray said that once his party forms the government, it would see what to do with the “murderers of trees”.

Yuva Sena chief Aaditya Thackeray lashed out at the Mumbai Metro Rail Corporation (MMRC) for “slyly and swiftly cutting down an ecosystem in Aarey”.  He remarked that the MMRC should rather be deployed in Pakistan Occupied Kashmir for destroying terror camps than destroying trees.

Aaditya claimed that some Shiv Sainiks who had been protesting the razing of trees Friday and Saturday, including deputy leader Priyanka Chaturvedi and Sheetal Mhatre, were forcibly pushed away or detained. “A project that should be executed with pride — the metro 3 — has to do this taking cover of the night, with shame, slyness and heavy police presence,” he said in a tweet. “These protesters can’t be arrested and slapped with cases. It’s a shame if we do that. I call out and request the CMO Maharashtra to look into this and ask the police not to slap cases against people who love the environment. We would be hypocritical then at the UN if we do this (sic),” he added.

However this did not go down well with the Opposition parties and citizens who blamed the Sena-BJP combine for the situation. Congress spokesperson Sanjay Jha tweeted, “Dear @AUThackeray: Who runs the BMC? You! The Shiv Sena and the BJP… And you have the temerity to shed crocodile tears for #AareyForest? Seriously?”

NCP spokesperson Nawab Malik, too, condemned the cutting of trees at Aarey by the MMRC. No sooner, AAP members rapped the NCP for its alleged double standards.

“...Your younger brother and NCP councilor, Kaptan Malik, shamelessly voted for the proposal at the Tree Authority. Your party didn’t reprimand him. @supriya_sule shows up at the site and pretends that she knows nothing! #Fail (sic),” tweeted  Ruben Mascarenhas of AAP.

Meanwhile, environmentalist Stalin Daya-nand tweeted, “Why can’t the environment minister of your party (Sena) Ramdas Kadam in command of the MPCB stop the carnage at Aarey. The MPCB terms of consent have been violated. No court has stopped the MPCB from implementing the law.”