The iron hoarding fell on commuters and vehicles waiting near a traffic signal. 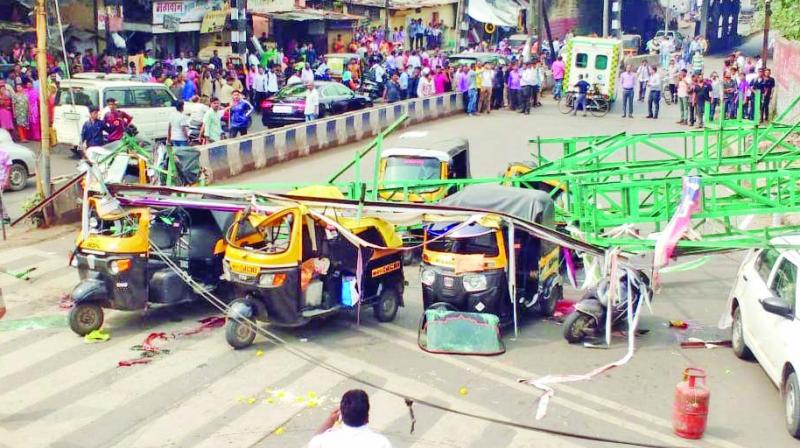 Remnants of the crashed banner

According to sources, the flex banner was in the process of being rem-oved from the hoarding near the Pune railway station when it crashed on vehicles and pedestrians moving on road, injuring several persons and damaging a number of auto rickshaws.

“The mishap occurred between 1.30 and 2 pm in the city’s crowded Maldhakka or Juna Bazaar Chowk area. We are still investigating the exact reasons for the crash. Fire department teams reached the spot immediately, moments after the accident occurred,” said a police official.

The iron hoarding fell on commuters and vehicles waiting near a traffic signal. The intensity of the crash grievously injured commuters sitting inside the autorickshaws, said police.

The deceased have been identified as Shyamrao Kasar (70), Shyam Dhotre (45), Javed Khan (49) and Shivaji Pardeshi (40). The injured have been rushed to the Sassoon Hospital for treatment. Some of them are said to be in a critical condition. More than 10 vehicles, including autorickshaws, cars and two-wheelers endured severe damage when the structure crashed on them, with one rickshaw almost completely mangled in the accident. The incident led to a major traffic snarl in the city, with traffic police rushing to the spot to maintain order.

Meanwhile, Congress leader Arvind Shinde, who heads the party within the Pune Municipal Corporation (PMC), held the railway authorities responsible for the unfortunate incident and castigated them for their alleged negligence in removing the old structures.

“Since 2013, the PMC had repeatedly sent notices to the Railway officials warning them of the dangers posed by these illicit hoardings. Yet, they failed to remove them on time. If the problem was dealt in a proactive manner, this mishap could have been prevented,” Mr Shinde said.