Nationalist Congress Party chief Sharad Pawar had held a meeting with his party legislators and senior leaders over the drought at YB Chavan. 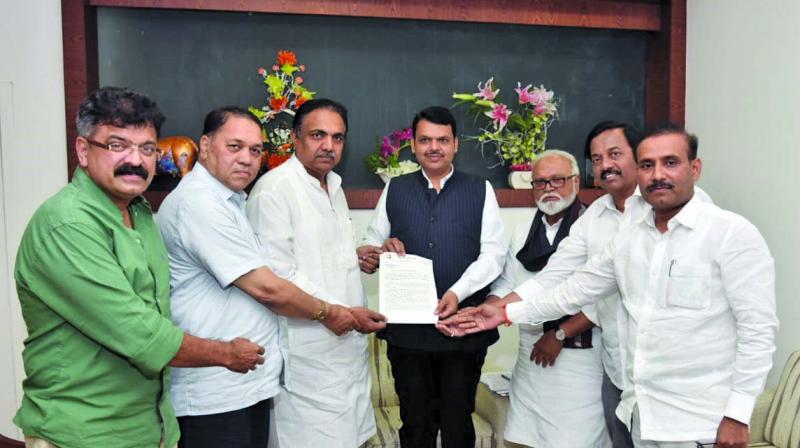 CM Devendra Fadnavis and the Opposition delegation with the memorandum concerning drought relief.

Stating that the situation is very severe, the Opposition has said that the government had established cattle camps very late and they were insufficient.

Nationalist Congress Party alleged that the government's terms and conditions for operating the cattle camps are very complex and the fodders provided are insufficient. The delegation, which included Chhagan Bhujabal, Rajesh Tope and Dilip Walse Patil, gave a memorandum pertaining to the drought relief to Mr Fadnavis late night on Saturday.

Mr Patil said that the money is falling short for cattle camps, thereby, badly affecting them.

He also said that unseasonal rains and hailstorm had taken place and the government has not given compensation for the same. It further demanded that the government should give the money as soon as possible to the farmers.

Nationalist Congress Party chief Sharad Pawar had held a meeting with his party legislators and senior leaders over the drought at YB Chavan.

Mr Pawar had held CM Fadnavis for not taking drought seriously. Mr Pawar had also said that the government failed to take cognisance of the drought.

The NCP leader said that a cattle is being provided three kg pend  (a kind of fodder), per week, which is insufficient. The fodder is not enough for cattle producing milk. Lack of fodder to the cattle would result in milk production.

The party also demanded to remove the cap of five cattle in fodder camps. In addition to this, it also demanded that recovery from farmers should be stopped and farmers loan should be restructured.

In order to tackle the drought, three measures including drinking water, employment and cattle camps need to be taken, suggested the Nationalist Congress Party chief.

It also demanded that the special measures be taken to save the horticulture farmers.

The CM stated the condition for releasing the water for drinking purpose in the district is that Karnataka should also release water from its reservoirs to drou-ght-hit- districts in that state.

Water resources minister D.K. Shivakumar had earlier requested the Mr Fadnavis for release of water for drinking purposes in districts like Belagavi, Bagalkot, and Vijayapura that are located on the Karnataka-Maharashtra border.

Mr Fadnavis told the delegation that based on availability, water will be provided to the Karnataka districts, however both the states should enter into a memorandum of understanding where Karnataka too would provide water to the Maharashtra’s drought affected areas from Almatti reservoir.

Following this, the state secretaries have been directed to begin work on the issue.