The first phase of the project, construction of a 2.5-mw plant, has already been started. 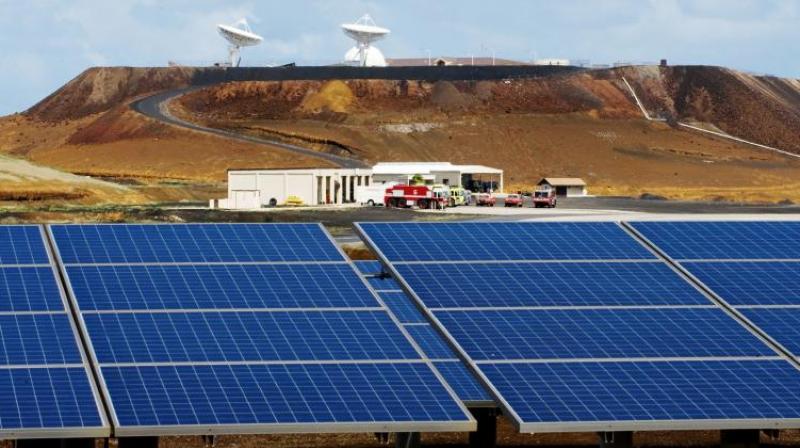 The second phase would include setting up of 10-mw plant.

Mumbai: The solar power system to be installed at the Bhandup water treatment complex will produce 1.75 lakh units of energy, which will save 33 per cent of the plant’s energy demand annually and Rs 14 crore on the power expenditure.

To save power by using unconventional energy sources, the Brihanmumbai Municipal Corporation (BMC) has decided to set up a 12.5-mw-capacity solar energy plant at the Bhandup water treatment plant, which treats raw water from four dams before supplying it to more than 20 lakh households across the city.

The first phase of the project, construction of a 2.5-mw plant, has already been started at 26,000 square metres of land on a pilot basis and is likely to be completed by January 2018. The second phase would include setting up of 10-mw plant.

“It will be the first time in the country that a solar power will be used on such a large scale in the water treatment plant,” said Ramesh Bamble, deputy municipal commissioner (special engineering).

The Bhandup plant, which is Asia’s largest water treatment plant, treats 2,300mld (million litres daily) water. It requires 45 lakh units of power on a monthly basis, which comes to 5.40 crore units every year. For this, the BMC bears monthly and annual costs of Rs 3.50 crore and Rs 42 crore respectively.

To reduce the expenditure, the BMC in association with IIT Mumbai in 2015 decided to set up a 12.5mw solar power plant. In the first phase, 7,812 solar panels will be installed during the construction of a 2.5-mw plant. The life span of these panels is about 25 years and they will produce 32-35 lakh units of power.

The second phase consists of installation of 31,252 solar panels, which will produce 1.40 lakh units of power. The BMC has made a provision of Rs 8.22 crore for the project in the budget estimates.

“The energy produced by the solar power plant, which will be set up by the hydraulic department, will be directly connected to grid of the power distribution company. Hence, according to the power generated, the units will be deducted from municipal bills,” said Mr Bamble.