Officials directed to coordinate during demolition

The court was hearing a PIL filed by NGO Janhit Manch. 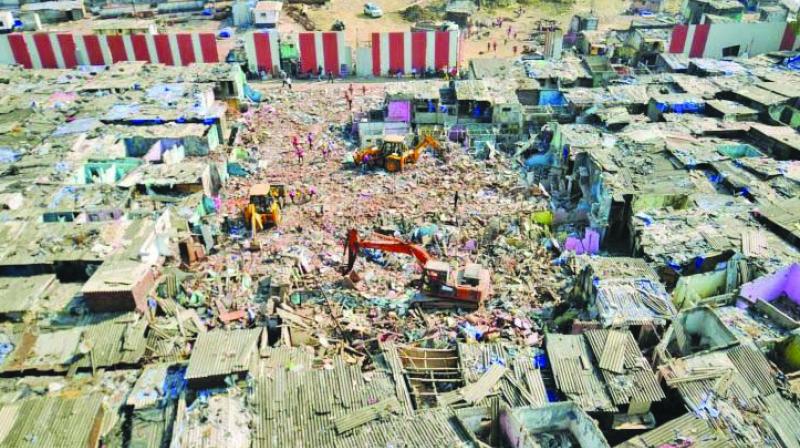 The Court asked the additional chief secretary to put protocol in place to be followed by authorities during the demolition drives.

Mumbai: Bombay high court on Friday directed the additional chief secretary (state home) to hold a meeting with Mumbai police chief and high-ranking BMC officials to ensure proper coordination between the civic body and police to carry out the demolition drive against illegal hutments on water pipelines and other encroachments.

A division bench of justice A.S. Oka and justice A.K. Menon also asked ACS to put in place protocol which could be followed by authorities during a demolition drive so that BMC officers had proper police protection while taking action against illegal encroachments.

The court was annoyed with the police as BMC alleged that despite requests, no proper security was provided to its officials who went to Tilak Nagar due to which, the court’s demolition order could not be implemented. “This cannot go on. There was a need to put an end to such things,” said justice Oka while reacting to this information.

The court was hearing a PIL filed by NGO Janhit Manch, seeking direction to concerned authorities to remove encroachments along all major water pipelines running through the city as it posed a security threat and risk of water contamination. During hearing of this PIL, the court in the past had directed the civic body to demolish all such encroachments on and around the city’s pipelines. On Friday, the bench said that local policemen should always be provided to BMC staff during demolition drives as they knew who could cause trouble during such efforts.

The court has directed ACS to take an appropriate decision in the meeting with CP and BMC officials, and file an affidavit by June 22.