The court added that the MMRCL is providing a facility to lakhs of people via the Metro. 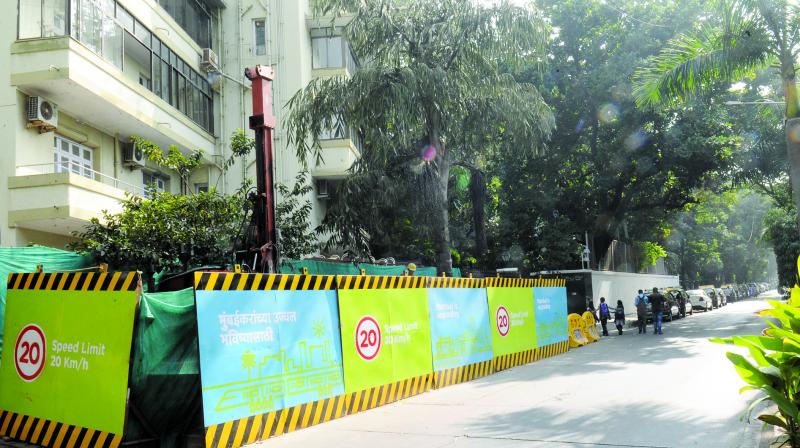 Petitioner complained that 5,000 trees would be axed for the Metro-3 project.

Mumbai: The Bombay high court on Friday vacated the stay on cutting of trees for the Colaba–Bandra-SEEPZ line of the Metro project, also known as Metro-3, observing that ‘Mumbai also needs a Metro train like Bangalore, Kolkata and Delhi.’

The court stayed cutting of trees for Metro-3 on February 9 after a petitioner had approached it complaining that 5,000 trees would be chopped for the project in the absence of the Union environment ministry’s requisite approval.

The court has also asked the Mumbai Metro Rail Corporation Limited (MMRCL) to file an undertaking that it would adhere to all environmental rules while constructing Metro-3 and will replant trees that will be cut down during the work. The court also set up a committee comprising two working high court judges, which will deal with the complainant regarding tree felling for the project. The Metro-3 project is worth around Rs 23,000 crore and encompasses a 33-km-long underground network.

A division bench of Justice Manjula Chellur and Justice G.S. Kulkarni was hearing petition filed by Neena Verma and Pervin Jehangir, residents of south Mumbai who alleged that 5,000 trees are to be cut while constructing Metro-3.

The petitioners also brought to the notice of the court that a proposed Metro station falls under a coastal regulation zone and the state government had not taken requisite permission for the same from the Union environment ministry.

The court asked the MMRCL to give an undertaking that if it cuts one tree, it will replant another in the same vicinity after the completion of the project. The court has said that the secretary of Maharashtra State Legal Services Authority and deputy registrar of the Bombay high court would oversee the MMRCL’s undertaking. The court also clarified that a compliance report would have to be submitted before the committee of two high court judges every month.

The bench observed, “The Metro project will help the city’s prosperity grow. If we take a harsh stand, which the petitioners want, it is impossible to conduct development work in the city.”

The court added that the MMRCL is providing a facility to lakhs of people via the Metro.

The high court has kept the matter for further hearing in July.

Ms Verma, reacting to the court’s order, said, “I am quite disappointed. After giving a stay in February, nothing has changed from the state’s side so what was the point of the stay? We are not against the Metro project, but there is no need to cut such a large number of trees. Therefore, we sought that an expert committee be formed, which will monitor the project from the environmental perspective. But the court has not accepted this. The court has given us time to approach the Supreme Court, but as of now we have not decided to do so.”

On the last hearing, MMRCL’s counsel Aspi Chinoy had argued that if the stay were not vacated, the state government would have to bear huge losses. “The monsoon is about to come and trenches will be filled with water and barricades will also create an inconvenience to traffic,” he had said. Mr Chinoy had also said, “The MMRCL is ready to abide by the promise it has given to the court that for every tree cut, two will be planted in the same vicinity.”