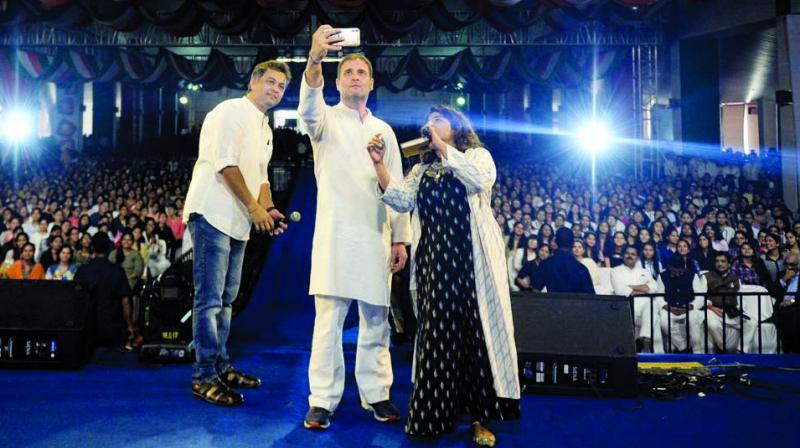 Congress president Rahul Gandhi poses for a selfie with students in Pune on Friday.

Mumbai: Congress president Rahul Gandhi on Friday said that his party’s manifesto is an expression of the people of India and ruled out burdening the middle class to fund the anti-poverty scheme Nyunatam Aay Yojana (Nyay). During the free-wheeling interaction mo-derated by RJ Malishka and actor Subodh Bhave, Mr Gandhi answered a number of questions, ranging from politics, his personal life and his bond with sister Priyanka Gandhi Vadra.

Interacting with students in Pune, the Amethi MP said that the manifesto has been prepared after consultations with all the stakeholders. He said, “The middle class will not be taxed and income tax will not be increased to implement the Nyay scheme, where `72,000 will be deposited in bank accounts of poor people every year if the party is voted to power.” The ruling Bharatiya Janata Party (BJP) had criticised the Nyay minimum income guarantee scheme, which is estimated to cost `3.26 lakh crore to the national exchequer.

When asked about the Congress manifesto that promises of scrapping NITI Aayog, the think-tank established by the current BJP-led regime, Mr Gandhi said “Erstwhile Planning Commission was a strategic institution. While its successor NITI Ayaog only talks about implementation and tactics. We need institutions to strategically think what should be done at the national level.”

Mr Gandhi said that the Congress was committed to provide 33 per cent reservation to women in Parliament and assemblies to substantially increase their representation. He also described demonetisations as a ‘disastrous idea’, which had a terrible impact on the economy.