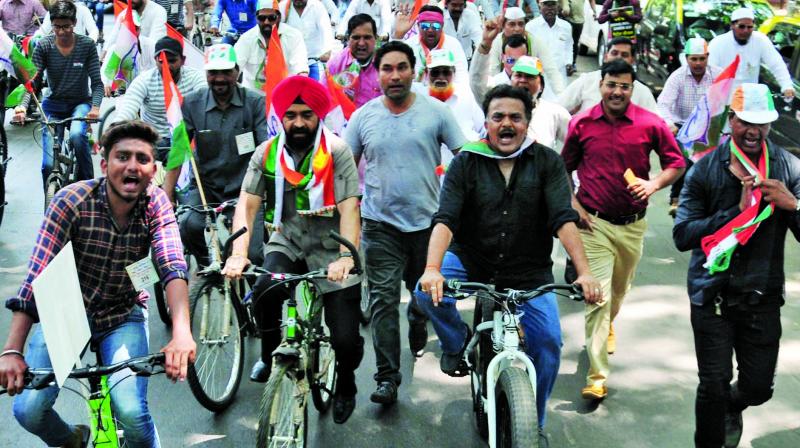 Mumbai: Congress Mumbai chief Sanjay Nirupam on Thursday led a bicycle rally from Mahalaxmi Racecourse to Girgaum Chowpatty in south Mumbai to protest the rise in fuel prices over the past few days. Attacking the BJP-led state and central government, he said that Mumbaikars were paying the highest price in the country for petrol and diesel.

“Mumbai is getting petrol for Rs 83 and diesel for Rs 70. This is the highest price in India. Why should a Mumbaikar pay for this?” questioned Mr Nirupam.

“Indians will throw this anti-people government at the centre into the sea. That's why we have come here to Chowpatty,” he taunted.

“India voted for him because he spoke of curbing inflation. He promised to bring down the rates of petrol and diesel. But, when the UPA government was thrown out of power in 2014, the petrol price was Rs 58 despite international crude oil rates being USD 138 per barrel. Now however, barrel rates have gone down to USD 70 but petrol price is as high as Rs 83. This has exposed the failure of the PM on the economy front,” he said.

“Maharashtra has the highest state tax on petrol and diesel. This shows how the BJP is banking on looting the common man’s pocket to govern. A party spending so much money on its foundation day celebrations is insensitive,” Mr Nirupam said.