P.K. Shahjahan, Dean of Students’ Affairs of TISS, confirmed to this newspaper that all the fees of SC, ST and OBC had been waived off. 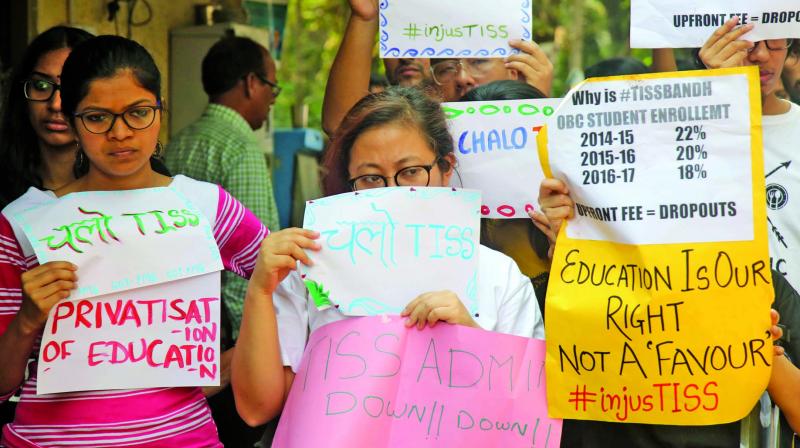 Mumbai:  The protest by students of the Tata Institute of Social Science (TISS) against the withdrawal of funds by the institute took a tumultuous turn on its 13th day as students entered the lobby of the Mumbai campus chanting slogans and demanding justice.

Students from Schedule Castes, Schedule Tribes and Other Backward Classes have been boycotting lectures, field work, assignments and projects for the last 12 days and protesting outside the campus. Similar protests regarding the same issue are taking place in other TISS campuses across the country. The funding for the education of these students have been reduced considerably as the Government of India has withdrawn the funds.

P.K. Shahjahan, Dean of Students’ Affairs of TISS, confirmed to this newspaper that all the fees of SC, ST and OBC students had been waived off. “While for the future batches (i.e. the academic year 2018-20), students will have to pay hostel and dining charges in instalments. OBC students will have Rs 12,000 exemption in tuition fees.

Along with this, students who cannot pay the instalments will be considered under the Students Aid Scholarship, which is funded through internal mediums,” Mr Shahjahan said.

Fahad Ahmed, general secretary of the Student’s Union said, “Even though the institute has decided to waive off the new rules of withdrawing the money for the current batches, we want them to do this for all future batches. We won’t stop the protest until then.”

By withdrawing funds for the education of the backward section students, he further said, the government is discouraging students from studying further, which is a right. “Education is an important sector and the government should take immediate action to support it," he said.