High power committee to decide whether to retain or expel Prashant Paricharak. 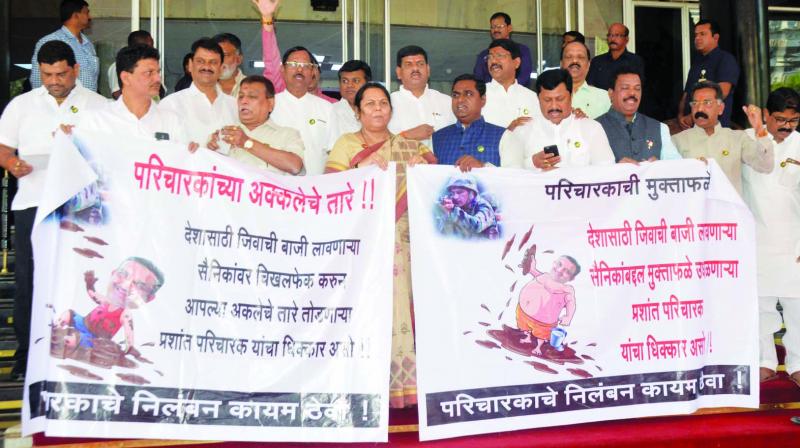 Mumbai: Though Shiv Sena has objected to the revoking of expulsion of MLC Prashant Paricharak over derogatory statements against soldiers in both the houses, MLC Neelam Gorhe has not taken a similar stand. Maharashtra’s legislative council has formed a high power committee to discuss and decide what to do about Mr Paricharak. The report of this committee is with The Asian Age.

Mr Paricharak has made controversial remarks against soldiers of Indian army and their families while campaigning for Zilla Parishad and Panchayat Samiti elections on February 17, 2017. This has angered the common people of the state and legislative council has decided to expel Mr Paricharak for one and a half year on March 9, 2017. The high power committee’s report on Mr Paricharak’s expulsion was tabled in the council in the last week where his expulsion was revoked with accepting unconditional apology.

When the house started on Monday, Shiv Sena leader Anil Parab raised issue of decision of revoking suspension of Mr Paricharak. He said, “This revoking of suspension is not right. Mr Paricharak’s crime is much bigger. He has insulted the soldiers of Indian army. This house should think on this decision and should expel him for the entire term.”

MLC Kapil Patil also said that Mr Paricharak’s suspension shouldn’t have been revoked by the house.

Shiv Sena members Anil Parab and Sunil Prabhu raised objections in the council and assembly respectively over the decision of revoking the expulsion. They along with other Sena members demanded the cancellation of membership of Mr Paricharak immediately. Though Sena has become aggressive on the issue in both the houses, the report of the high power committee of council shows that it’s representative in the committee has not objected the decision. Ms Gorhe was the member of the high power committee, which has tabled its report of February 28, 2018 in house.

The details of the report shows that Ms Gorhe did not raise any objection.

Giving her side on the different stands Ms Gorhe said, “I do not agree with the report prepared by the high power committee because the meeting mentioned in the report never took place. I was neither informed nor called for any such meeting. I was under the impression that the issue will be discussed in the future in details. But that never took place.”

When asked about his party’s different stands in the committee, council Mr Anil Parab, who is also the leader of Sena in Council said, “Whatever the report of the committee is, it is our right to speak on the issue in the house. Our party is firm in demanding an action against him.”