Rao is set to address both houses of legislature on the day of commencement of state assembly session on Monday. 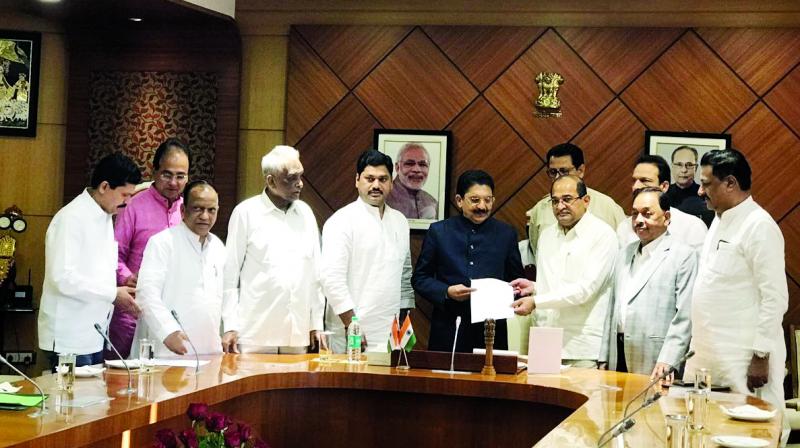 Mumbai: Complete loan waiver to the farmers is likely to be a principal issue in the budget session of Maharashtra’s legislature that is to start from Monday. Opposition parties have put pressure on the government forming a united front for demands from governor C. Vidyasagar Rao. Mr Rao is set to address both houses of legislature on the day of commencement of state assembly session on Monday.

On Sunday, leaders of all opposition parties, including opposition leaders of both houses, met the governor requesting him to instruct the government on waving off farmer loans. A memorandum, given to the governor by opposition parties read, “Almost nine thousand farmers have committed suicide in last three years in Maharashtra. In just last two months 117 farmers committed suicides in Marathwada. These numbers shows the stress farmers are undergoing due to misrule of state government.” The memorandum demands complete compensation for farmers. The issue has attracted Shiv Sena’s support as well, as Sena ministers have demanded the same in Sunday cabinet. Not long back, Sena chief Uddhav Thackeray had placed the condition that the party will support the state government only if it waives loans for farmers completely.

After the meeting, Sena minister Ramdas Kadam said, “We have demanded relief for farmers. If Narendra Modi could promise loan waiver in UP then why is the CM not doing the same for Maharashtra? He should go to Delhi and get the PM’s clearance for this.”

Looking at the only issue that opposition and its partner Sena is pushing to corner him, Mr Fadnavis is readying his argument.