The forest department officials issued the do’s and don’ts to the locals in the area. 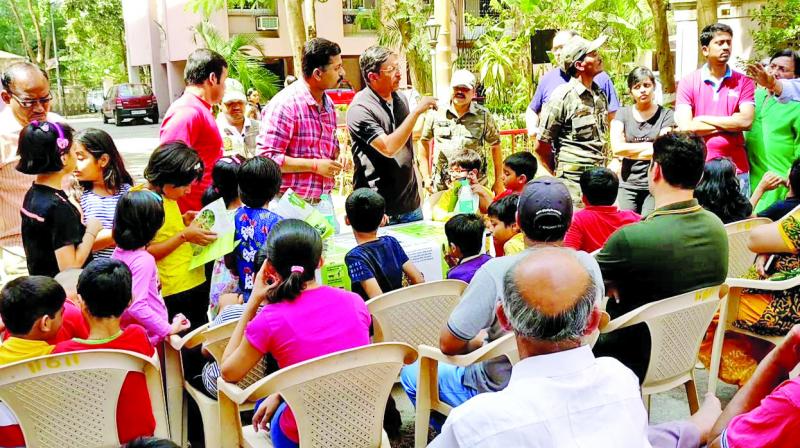 Mumbai: Co-ordinate and remove stray dogs from neighbourhoods, accompany your kid while they are playing in the society compound post sunset, keep parking spaces well-lit and turn on the car’s music system while returning home late - these are some of the tips 100-odd Goregaon residents received on Sunday from forest department officials amid the fear over a leopard entering the residential area last week.

In a bid to create awareness about the big cat, the forest department officials along with the citizen’s group Mumbaikars for Sanjay Gandhi National Park (MFSGNP) counselled the Goregaon residents. The counselling session was conducted as the residents had expressed concerns over leopard entering the residential society in Goregaon. The senior department officials not only addressed the concerns of the residents but also held personal interactions with them.

Dr Shailesh Pethe, a veterinarian of SGNP, said, “The residents of the society had many doubts and asked us to assure them that the leopard will not enter the area again. Hence we explained them about the animal’s behaviour and its movement pattern.”

Advising the residents to keep the parking areas well-lit, the officials alerted the residents about the possible risks involved due to the presence of stray dogs in the area. “We have asked them to coordinate with NGOs and remove the stray dogs from the area as they attract leopards,” added Dr Pethe.

According to sources, the watchman of the society had seen a leopard on its peripheral wall three months back. Last week, the street dogs in the area had collectively attacked the leopard after he tried to catch hold of a dog.

Shailesh Rao, a volunteer of NGO Mumbaikars for Sanjay Gandhi National Park (SGNP) and also a resident Goregaon said, “It was essential for us to explain them the meaning of residing in SGNP’s neighbourhood and also the dos and don’ts to co-exist with the animals. They were informed the precautions they have to take post sunset.”