The kids informed the GRP about the incident, following which the Borivali GRP called the kids’ mothers. 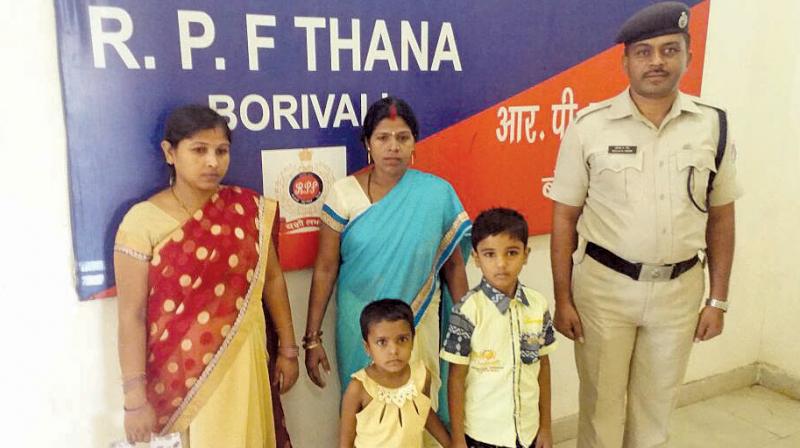 The rescued children with their mothers.

Mumbai: The Borivali Government Railway police (GRP) rescued two minor kids on Sunday morning, who were separated from their mothers and had entered the coach meant for physically challenged commuters in a Virar-bound suburban train from Andheri.

GRP personnel spotted the minors, Shubham Kanojia (6) and Saloni Kanojia (4), in a coach meant for physically challenged commuters. The kids were reunited with the mothers, an hour after they got separated from them.

The two mothers along with their respective kids were on their way to meet relatives in Virar on Sunday morning. The family, residents of Saki Naka in Andheri (West) boarded a Virar-bound train from platform number 4 of Andheri station. Due to the rush at Andheri station the children were separated from their mothers. The two minors entered the coach meant for physically handicapped, while their parents were left behind at Andheri station.

Speaking to The Asian Age, Satish Bhor of Borivali GRP said, “After receiving a phone call from a passenger on the Virar-bound train, we immediately rescued the kids. We brought the kids to Borivali post.”

After being brought to the Borivali police post, the kids informed the GRP about the incident, following which the Borivali GRP called the kids’ mothers.