The Central Railway (CR) has awarded both Naik and Shukla a cash prize. 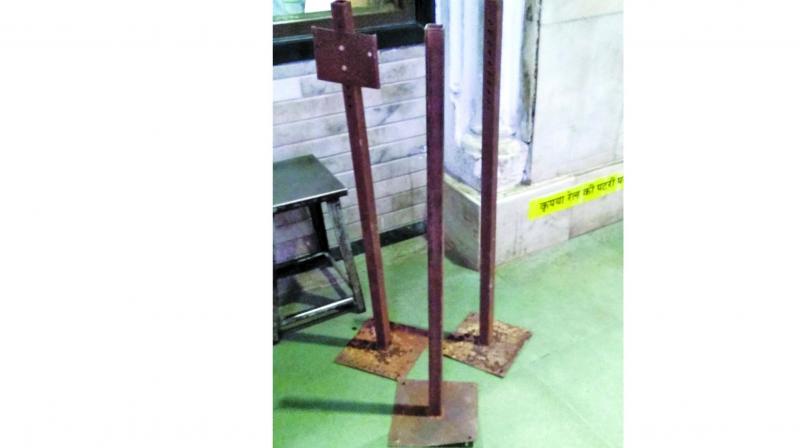 The three rods found on tracks near CST.

Mumbai: After a lull of almost nine months, a fresh incident of four rods across railway tracks was witnessed between Masjid and Chhatrapati Shivaji Maharaj Terminus (CSMT) on Monday around 7.30 am.

However, the tragedy was averted due to the alertness of motorman M.B. Naik, who was motoring a Panvel-bound train on the opposite railway track. Officials said the rods resembled those used for signposts. Mr Naik alerted motorman Anurag Shukla, who was driving the CST-bound train with his flashlight. Mr Shukla brought the train to a halt. The Central Railway (CR) has awarded both Mr Naik and Mr Shukla a cash prize.

Deputy commissioner of police CR Samadhan Pawar said, “The rods look like the ones used to hang posters. We do not suspect foul play.”

The GRP believes that the rods may have slipped from the hands of labourers who might be using the train to transport the material.

Senior divisional security commissioner Sachin Bhalode said, “We have handed over the case to GRP, we have to look at all angles so sabotage will be looked into though it looks unlikely.”

Senior public relations office A.K. Jain said the issue is currently being handled by the Government Railway Police (GRP, who has not registered a case under the Indian Penal Code but has registered it under the Railway Act.

The GRP has registered the incident under Railway Act 152 (maliciously hurting or attempting to hurt persons travelling by railway). The act states that if any person unlawfully throws or causes to fall or strike at, against, into or upon any rolling stock forming part of a train, any wood, stone or other matter or thing with intent, or with knowledge that is likely to endanger the safety of any person being in or upon such rolling stock or in or upon any other rolling stock forming part of the same train, he shall be punishable with imprisonment for life, or with imprisonment for a term which may extend to 10 years.

Past incidents
The first incident of sabotage was at Diva when the Jan Shatabdi ran over abandoned tracks laid across the train’s path.

Three similar incidents occurred in Navi Mumbai between Kalamboli and Taloja where gelatine sticks were found.