The event will be broadcast through LED screens and plasma TVs that will be beaming live footage captured through video cameras. 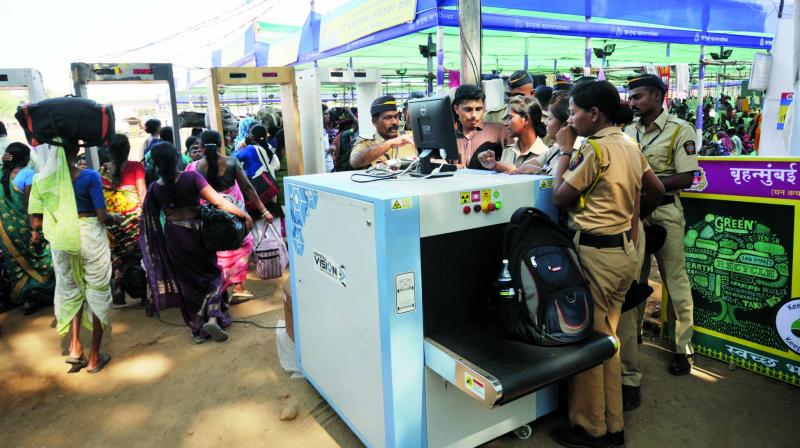 Preparations are in full swing at Shivaji Park to welcome B.R. Ambedkar followers on December 6.

Mumbai: The Brihanmumbai Municipal Corporation (BMC) and the Mumbai police are going all out to meet the large turnout of Dalits who will be visiting Chaityabhoomi on December 6 to pay their respects to Dr Babasaheb Ambedkar. Anticipating a larger than usual turnout due to the 60th anniversary as well as the possibility of Dalit leaders attempting a show of strength, the authorities are leaving no stone unturned to ensure that the event goes off without any hitch.

According to BMC officials from G North ward, there is a possibility of “Dalit leaders planning a show of strength” in response to the mammoth Maratha rallies held in the state in recent months. “The police authorities informed us of this and hence we have installed door frames, metal detectors and bag scanners. The venue will also be kept under constant surveillance via CCTVs. The event will be broadcast through LED screens and plasma TVs that will be beaming live footage captured through video cameras. Watchtowers have also been erected to secure the venue,” said the official. A large pandal measuring more than a lakh square feet has also been erected on Shivaji Park for the visitors.

Apart from this, the BMC has set up 10 control rooms and eight information centres to help visitors. A dozen ambulances have been stationed at various locations around Shivaji Park, and Chaityabhoomi and water tankers, utility vehicles and fire engines have also been kept on the ready to aid the visitors. Around 750 workers and 16 lifeguards have been put on duty round the clock at the venue and Dadar Chowpatty beach, which has the book stalls.  “Security arrangements are being made, as requested by the police,” said Ramakant Biradar, assistant commissioner of G-North ward, adding that the security measures and facilities were much higher than last year in response to the police inputs.

On its part, the police has made elaborate arrangements for the ease of traffic. A senior police official said that as the visitors would start arriving in Mumbai from December 4 at and around Shivaji Park vehicular traffic would be restricted on some of the roads in Dadar locality. The roads include Veer Savarkar Road, Ranade Road, NC Kelkar Road, Keluskar Road, LJ Road, Gokhale Road, Kataria Road, Tilak Bridge, SK Bole Road and Bhavani Road. Motorists have been advised to use Senapati Bapat Marg, NM Joshi Marg and Dr BA Road to avoid snarls.