This is the first case in which the three brothers have been named together. 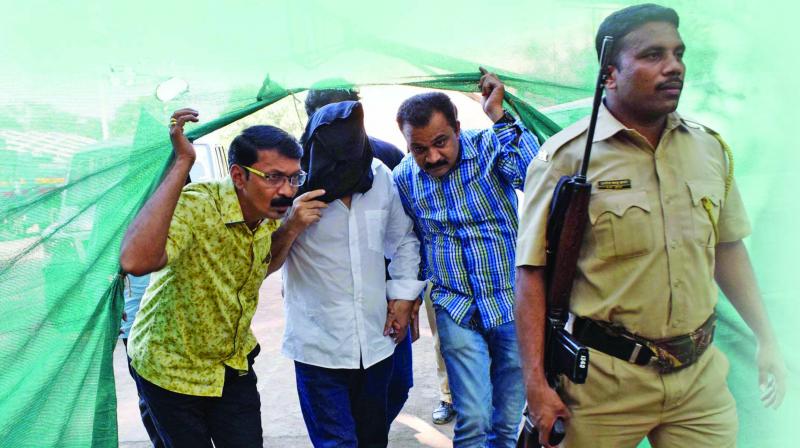 Kaskar being brought to the court for hearing of the case. (Photo: Deepak Kurkunde)

Mumbai: The Thane crime branch has booked fugitive gangster Dawood Ibrahim in the third extortion case registered against his brothers Anees Ibrahim, Iqbal Kaskar along with two of the latter’s aides. This is the first case in which the three brothers have been named together.

Dawood had allegedly spoken over the phone with some of the accused, who specially travelled to Dubai to evade tracking by Indian intelligence agencies, according to the police. Anees had also allegedly called the complainant to threaten him and ask him to back off from sale as Dawood was interested in the Gorai land. The cops arrested Kaskar and his two aides on September 18, in an alleged extortion probe, in course of which three separate cases have been registered against him.

Apart from the three brothers, the others accused in the case include Bharat Jain and Tony Lewis. The police are on the lookout for all the accused apart from Kaskar, who is in their custody. “We have learnt that Jain went to Dubai, from where they spoke to Dawood via phone call. They knew any such call made from here would be intercepted. Hence they avoided making calls from Mumbai,” said a crime branch officer.

The third case pertains to a 38 acre land parcel in Gorai, owned by Lewis, who struck a deal with the complainant in the case, for `35 crore and took `2 crore as down payment in 2007. However, Lewis demanded more money as the transfer of ownership was delayed and the documents could not be made on time. The complainant filed a civil suit in the Bombay High Court (HC).

“Our investigation has revealed that Anees made threatening calls between March 2012 and April 2013 on several occasions and asked the complainant to stop taking interest in the land parcel as Dawood wanted to buy it. He also threatened to bump him off if he failed to give them `1 crore more. The money was to be delivered to Kaskar in person,” added the officer.
The police said that the complainant paid the extortion money fearing for his life, but he did not take back the civil suit from the HC. The police also revealed that the proposal to invoke the stringent MCOCA was in the final stages and would be ready following a few corrections. It will pave the way for a stronger case against the Kaskar brothers, officials claimed.