According to weathermen, the normal rainfall that is usually recorded during the month of September was received in four days alone. 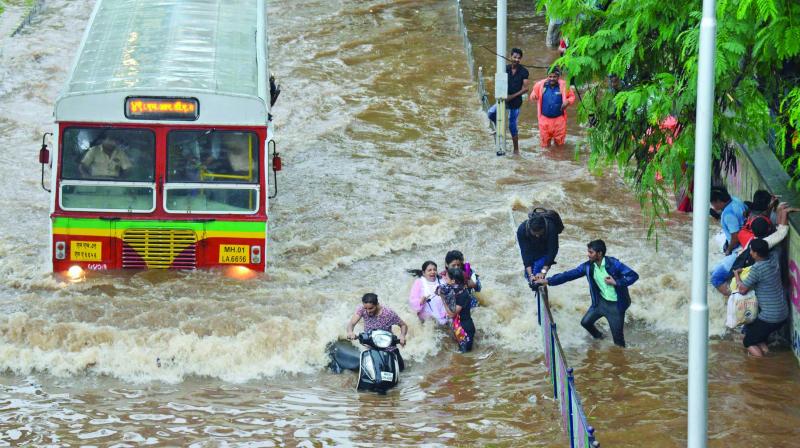 Mumbai: The Indian Meteorological Department (IMD) has issued ‘red alert’ and predicted extremely heavy rainfall at a few places for Mumbai, Thane and Palghar for the next 24 hours.

According to weathermen, the normal rainfall that is usually recorded during the month of September was received in four days alone. A total of 403.5 mm of rainfall was recorded between September 1 and Septe-mber 4, surpassing the average monthly rainfall of 327.1 mm. “Santacruz IMD weather station rec-orded 282.1 mm since September 1, till the wee hours of September 4. After 8.30 am, it recorded 121.4 mm till 11.30 am, su-rpassing the average rainfall for September,” said K.S. Hosalikar, deputy director-general, IMD Mumbai. As per IMD data, the normal rainfall recorded in September between 1960 and 2010 has been 327.1mm for the Santacruz observatory and 304.6mm for the Colaba observatory.

According to IMD, out of the 150 weather stations in the Mumbai Met-ropolitan Region (MMR), around 100 recorded over 200 mm rainfall since Tuesday. Andheri (east) recorded the highest rai-nfall in six hours at 214 mm rainfall, followed by Andheri (west), Vikhroli, Marol and Ville Parle.

“While the intensity of the rains is normal, the continuous downpour has led to water accumulation in many places,” said an IMD official.

The downpour could be attributed to three weather systems over the region, which would persist for another 24 hours and gradually weaken in the coming days.

“The rains could be attributed to the cyclonic circulation, still intact over the Gujarat region.

...A low-pressure area is over Odisha and adjoining area. This system has activated the monsoon surge along the west coast. Moreover, a wind shear zone is extending from North Konkan and Goa up to Odisha about 3.6 km above the main sea level,” read the forecast of Skymet Weather, a private company.