The MNS put up posters depicting Kadam as Ravan outside Chief Minister Devendra Fadnavis' residence and in Ghatkopar. 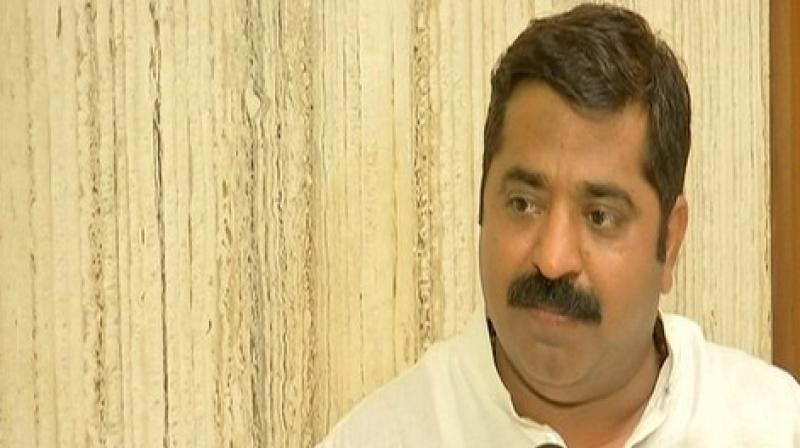 Ram Kadam, who is heard making the comments in a video clip, has said his comments were distorted. (Photo: ANI)

Mumbai: The MNS and the NCP Wednesday likened Maharashtra BJP legislator Ram Kadam to demon king Ravan for telling youngsters he would "kidnap" a girl they like even if she rejects their proposal.

The Ghatkopar MLA, who has expressed regret over his remarks, made the comments at a 'dahi handi' event in his suburban Ghatkopar assembly constituency Monday night.

The Maharashtra Navnirman Sena put up posters depicting Kadam as Ravan outside Chief Minister Devendra Fadnavis' residence and in Ghatkopar.

Also Read: Will kidnap the girl you like: Mumbai BJP MLA brags to youngsters

"The 'dashing' MLA, who proclaims himself to be compassionate, will abduct daughters. If he or his men do so, file a police complaint and also let us know. We will help you safeguard your daughters," the Raj Thackeray-led party said in the posters.

Nationalist Congress Party spokesperson Nawab Malik said the BJP's "Ravan-like" face is out and its legislator will be called "Ravan Kadam" till he apologises.

Kadam, who is heard making the comments in a video clip, has said his comments were distorted. "My statement is being quoted out of context. At that event, I said that all youngsters whether it be a boy or girl should take their parents' in confidence before marrying."

"The clip which has gone viral is only of 40 seconds. However, later I had said mothers, sisters and daughters in all households are Lakshmi who need to be respected," Kadam said late Tuesday.

"Yet, if I have hurt sentiments, I express regret," the MLA said.