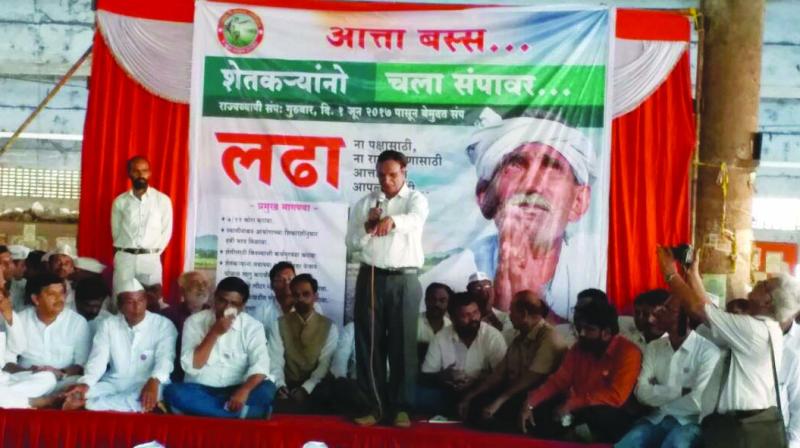 Farmers held a meeting in Nashik on Sunday in continuation of their protests.

Mumbai: The state government’s efforts to divide the ongoing farmers’ strike has not made much impact, as the farmers have remained firm on Maharashtra bandh on Monday.

In fact, farmers held a meeting in Nashik on Sunday, demanding withdrawal of criminal cases filed against some of them by the government. The farmers want immediate loan waiver, although chief minister Devendra Fadnavis has assured to think about it till October 31. The farmers have appealed all businessmen, middlemen to support their bandh on Monday. “The entire state will feel the impact of the bandh,” said Ajit Navale, a leader of Kisan Sabha. Meanwhile, public works department minister Chandrakant Patil said that the government was ready to talk to the irked farmers. “The government is keen on holding talks with farmers who still feel disappointed, and finding a solution to their problems,” Mr Patil said.

The farmers will hold a meeting in Mumbai on June 7 and a state level conference on June 8 at Nashik. All the prominent farmer leaders will attend these meetings to decide their further course of action. “We will continue our strike till the demands are fulfilled,” Atul Nemade, one of the farmers leaders said.

The development comes a day after the chief minister met a group of farmers’ leaders and announced withdrawal of strike. The CM on Saturday, promised to think about the farmers on loan waiver till October 31, an act for minimum support price, forming commission for agriculture prices, increasing milk prices and waiving off electricity bills among other things. The CM also said that he would appoint a committee of government officials, ministers and farmers’ representatives to decide parameters for the loan waiver.

However, the farmers are firm on their demand for complete loan waiver. In the past two days, some protesting farmers stopped trucks transporting fruits and vegetables.

There were incidents of farmers stopping a milk tanker and spilling the milk on the road.