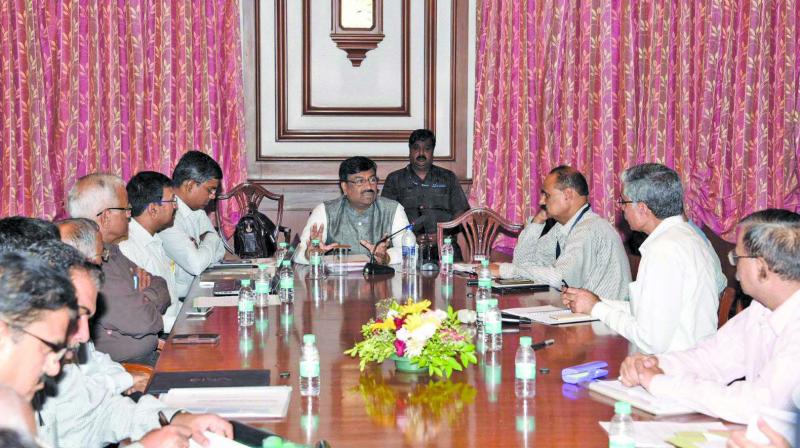 Sudhir Mungantiwar briefing officers on the GST Bill on Thursday.

Mumbai: Maharashtra finance minister Sudhir Mungantiwar chaired an important meeting for the Goods and Service Tax (GST) bill that will be tabled for passage in a special session of the Assembly from May 20 to May 22.

Mr Mungantiwar met with senior officers from the finance, planning and revenue team as well as state ministers of housing and law. The state government is likely to arrange for a special workshop for members of the legislature to update them about the new tax system on May 9.

According to an initial estimate, the state may lose Rs 14,000 crore after the GST comes to force. However a GST council set by the Union government assured states of compensation in case of losses. In the Thursday meeting, Mr Mungantiwar took stock of preparations to minimise revenue loss in this backdrop. The state has already started planning of funds for this year.

Mr Mungantiwar has also asked officials to make a detailed note on their departments, which could be used in the coming workshop. Not only Congress and the Nationalist Congress Party but also the Shiv Sena has raised a few questions especially regarding losses of municipalities due to the implementation of GST. Shiv Sena chief Uddhav Thackeray on Thursday questioned implementation of the GST, and warned that it should not affect the revenue of Brihanmumbai Municipal Corporation (BMC) and other municipal bodies.

At Sena Bhavan on the sidelines of a party programme, Uddhav said, “We have cleared our stand on the GST. We will keenly observe its implementation when it comes into force. If municipal corporations are losing their autonomy to the Centre, we will have to rethink the GST.”

He reminded the state that autonomy of the BMC and other municipal corporations should remain intact.“If the corporations have to beg for revenue before the government, we will oppose the GST,” he added.

Sena has been raising apprehensions about GST since the beginning. Its MPs have raised the issue in Parliament as well. With the Centre approving the GST act in the last Parliament session, the state will be implementing it from July this year.