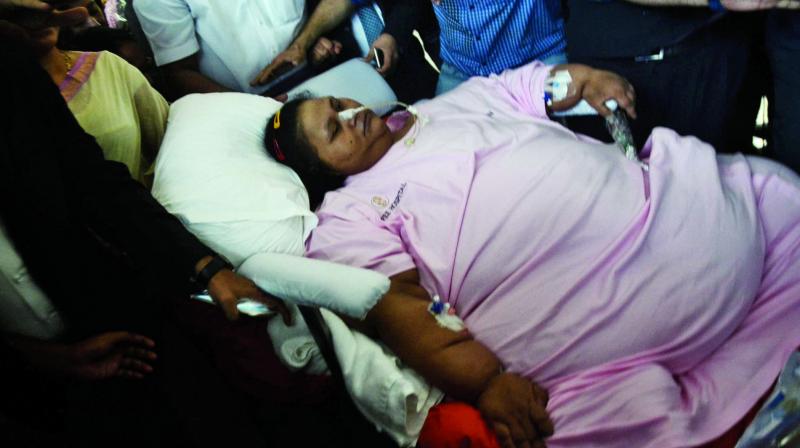 Egyptian national Eman Ahmed is carried on a stretcher towards an ambulance on Thursday. (Photo: Shripad Naik)

Mumbai: After a stay of around 83 days at Mumbai’s Saifee Hospital for weight-reduction treatment, Egyptian national Eman Ahmed (36) left in an EgyptAir cargo aircraft for Abu Dhabi around 4.15 pm for further treatment at VPS Healthcare’s Burjeel Hospital there.

Ms Ahmed’s journey from the hospital to the city’s international airport, via a green corridor provided by the Mumbai traffic police, turned into a spectacle, with camera crews from the media tracking her ambulance’s every motion amid popping flashbulbs. Thanks to the green corridor, the ambulance reached the international airport at Sahar in Vile Parle in around 20 minutes instead of the usual 60 minutes, according to the traffic police’s joint commissioner of police Amitesh Kumar.

A nine-member medical team from Burjeel Hospital accompanied Ms Ahmed for whom a special Italian stretcher and mobile bed was used. Ms Ahmed, who weighed around 500 kg at the time of her admission in Saifee Hospital, is around 330 kg lighter thanks to bariatric surgery and the liquid diet she has been on since February.

Stating that the patient’s safety is a priority, VPS Healthcare CEO Dr Shajir Gaffer said, “She should be comfortable while travelling. We thank the ministry and consulate as well as the Mumbai police for their excellent support.”

Dr Muffazal Lakdawala, the bariatric surgeon who brought Ms Ahmed for treatment from Alexandria on February 11, said, “We have been closely monitoring this case. We are happily transferring the patient and have taken all the care that was needed.”

Asked about Ms Ahmed’s sister Shaimaa Selim’s sour relations with Saifee Hospital and his team, Dr Lakdawala said, “Everything will settle down. We have medically documented her case. This is going to be the reference point for obese patients that they can be medically treated and serve as hope for them that they can drastically reduce their weight after surgery.” He added, “We have had a tough time dealing with Ms Ahmed before surgery. During her hospitalisation, we were unsure about whether or not she could ever make it back to Egypt.”

Ms Ahmed underwent a routine health check-up on Thursday morning with a round of physiotherapy, intake of pills for her kidney and seizure control and a sponge bath. Bariatric surgeon Dr Aparna Govil Bhasker said, “ We have taken all the necessary precautions to ensure that she has a safe landing at Abu Dhabi and won’t have any problem in the air.”