He also lauded the role of armed forces in safeguarding territorial, maritime and economic interests of the country. 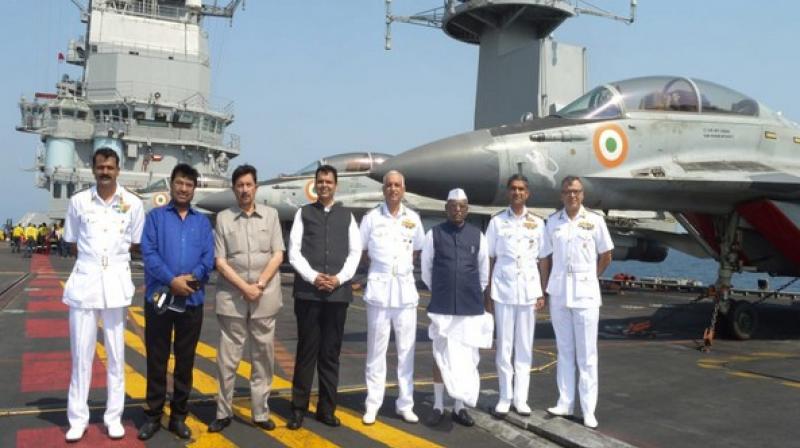 Chief Minister Devendra Fadnavis along with MPs and senior state functionaries visited the onboard frontline Indian Naval warships of the Western Fleet on Thursday. (Photo: ANI)

Mumbai: Maharashtra Chief Minister Devendra Fadnavis along with MPs and senior state functionaries visited the onboard frontline Indian Naval warships of the Western Fleet and witnessed a naval exercise on Thursday morning. This was the first time such an event was attempted.

Fadnavis lauded the role of the armed forces in safeguarding territorial, maritime and economic interests of the country, acknowledged the gallant services of the naval personnel to the nation with professionalism and fortitude in the challenging environments of the high seas.

The dignitaries were on board frontline Navy warships of the Western Fleet for the exercise, in which INS Vikramaditya along with warships INS Chennai, INS Kolkata, INS Trishul and INS Teg of the Western Fleet participated, the official added.
The shipborne Anti-Submarine Warfare Seaking and AEW Kamov helicopters and the MiG 29K carrier-borne fighter aircraft participated in an impressive air power demo.

"Besides a detailed briefing on the role and scope of operations of the Western Naval Command, an Operational Demo was conducted for the embarked personnel. The exercises and live demonstration included a submarine demo by the recently commissioned submarine INS Kalvari and missile demo by INS Vidyut," the official noted.

"In addition, a Search and Rescue demo by SAR helicopters provided a clear insight into the complexities of rescue operations at sea, especially in higher sea states," the official said in a statement.