Fire erupts in a warehouse in Kurla, no casualties 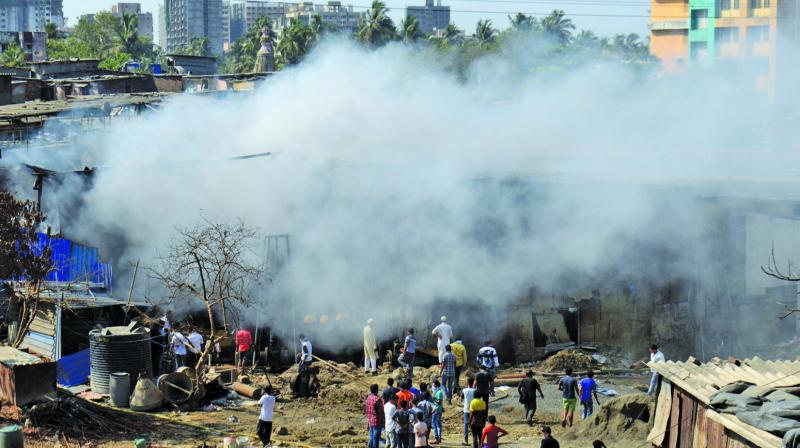 Though there were no injuries or casualties, traffic on Eastern Express Highway was disrupted. (Photo:Rajesh Jadhav)

Mumbai: A major fire broke out in a footwear company’s warehouse at Thakkar Bappa Colony in Kurla East on Tuesday. Though there were no injuries or casualties reported, the fire disrupted the traffic on nearby Eastern Express Highway.

According to fire officials, the fire broke out in a tyre company’s warehouse located in Vatsalatai Nagar on SB Barve Road at around 2.30 pm.

As the fire spread rapidly, the fire brigade declared a fire II call and accordingly six fire engines and seven tankers were pressed into action to douse the flames. The smoke was seen billowing from the warehouse. The fire was finally brought under control at around 6 pm.

As the fire raged for a couple of hours, traffic on Eastern Express Highway was halted as a measure of precaution, which led to a traffic jam.

“The fire spread rapidly due to rubber goods inside the warehouse as it was a tyre company. But the labourers of the company managed to escape,” said a fire official.

“The cause of fire is yet to be ascertained. We have launched an investigation to find out the reason behind the eruption of fire,” said chief fire officer Prabhat Rahangdale. No injuries or casualties have been reported in the incident.