Forest officials stated that the condition of the deer is critical and will be kept under observation for the next 48 hours. 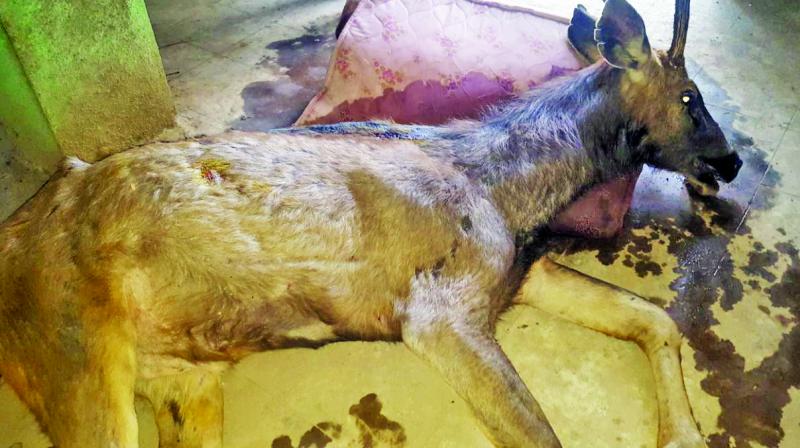 Mumbai: A sambar deer was rescued from near a residential society at Kranti Nagar in Kandivali east Sunday afternoon. The deer is expected to have strayed from its habitat at the Sanjay Gandhi National Park (SGNP). The deer was first spotted by a few residents who alerted the forest department. A forest team that arrived at the spot found the deer to be suffering from severe dehydration and wounds suspected to have been caused after its fall from hill slopes, said forest officials.

“We rescued the deer which was lying exhausted in Kranti nagar area. It could not even get up and had injury marks on it,” said Sunish Subramanian, wildlife warden, Mumbai and secretary, plant and animals welfare society (PAWS).  The wildlife wardens stated that since there have been incidents of wild animals venturing out of the SGNP, the Forest Department should also install more artificial water pools in the national park and mostly on its boundary, especially during summer season. “Many animals stray out of the forested area towards the city and mostly due to the intense heat during summer, they get dehydrated and fall ill,” said Mr. Subramanian.

“As such there should be more artificial water pools installed at the national park’s boundary, which will not only help in preventing excessive dehydration in animals but will also keep them within the forest areas,” he added. Every year, the Forest Department make preparations of filling the water holes in the SGNP during summer for wild animals.

Forest officials stated that the condition of the deer is critical and will be kept under observation for the next 48 hours.

“The deer is severely injured as it has fallen down from the hill slopes. It may have exhausted in the hill area as it was found extremely dehydrated and must have fallen down,” said Dr. Shailesh Pethe, Veterinary Doctor, SGNP.

“Deers are very timid animals. The fall with such a strong friction, which left it severly injured, may have affected it both physically and mentally. We have given it pain killers and steroids, we hope it gets better soon,” added Dr. Pethe.