The Congress leader was addressing a joint press conference with Dhananjay Munde on the eve of the state Budget session. 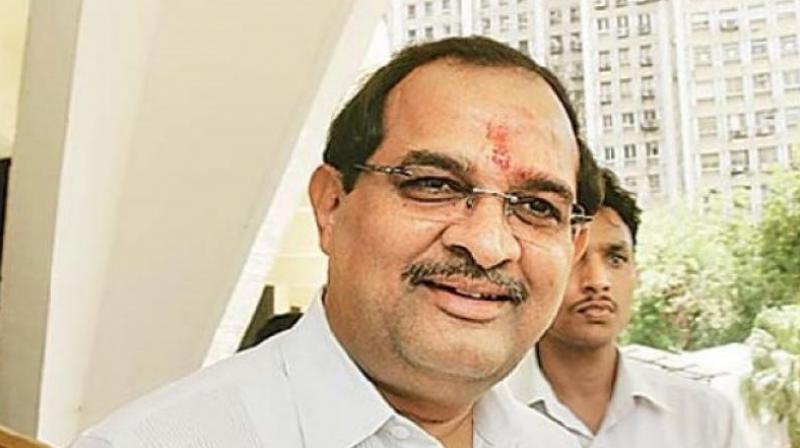 Mumbai: The opposition Congress on Sunday attacked the BJP for its decision to withdraw from the BMC's mayoral race in favour of Shiv Sena, saying it amounts to an April Fools' prank pulled on the people.

"The way both the parties (Sena and BJP) criticised each other during the recent poll campaigns and the manner in which the BJP paved way for the Sena to have its mayor, I think it is like pulling an April Fools' prank on the people in the month of March," Leader of Opposition in Maharashtra assembly Radhakrishna Vikhe Patil said on Sunday.

He was addressing a joint press conference with Leader of Opposition in the Council Dhananjay Munde on the eve of the Budget session of the state legislature beginning on Monday.

"The BJP leaders were thumping their chest and claiming that the next BMC mayor will be from their party. What happened to it?" Vikhe Patil asked.

"People voted the BJP to be a transparent opposition party. The BJP has denied itself even this role," he said. The Congress leader accused the Shiv Sena of being indifferent to the farmers' plight, saying, "The Shiv Sena is backstabbing the farmers as the party asked for loan waiver when it went to meet the CM during the election campaign with an eye on zilla parishad seats”.

He further added, "However, with decks cleared for BMC mayor's post, it is clear that the Shiv Sena was interested only in the BMC. It made hollow statements related to farmers and now it has forgotten their plight."

In this calendar year, 117 farmers from Marathwada region ended their lives, but government is insensitive to this, said the veteran Congress leader.

"We will see whether the Shiv Sena really cares for the farmers and supports us when we will raise the loan waiver demand in the coming session," Vikhe Patil said.

Taking a dig at Chief Minister Fadnavis regarding farmers' loan waiver, he said, "Fadnavis is checking horoscope to find a suitable date to issue a loan waiver."

"This (BJP) government is treating the corporates softly but not the farmers," alleged Vikhe Patil, claiming that even the farmers' leaders like Raju Shetti were not happy, "though he is a BJP ally".

Prime Minister Narendra Modi announced in Uttar Pradesh that his government will waive off loans of farmers if voted to power.

"I demand that the BJP-led government should start it from Maharashtra," he said, adding "Misuse of government machinery is one more issue we are going to focus on this session."

NCP leader Dhananjay Munde said, "There was scarcity of rainfall for last three years in Maharashtra. When the state received good rainfall in 2016, demonetisation brought the drought of cash in rural areas.

There has been at least Rs 1,800 per quintal loss to soyabean growers in the state due to demonetisation. Same is the case with cotton growers, he claimed.

"If you want to win UP by loan waiver, then Maharashtra farmers should get similar benefits," he said. On Maratha reservation, Munde said that during the recent hearing in the high court the government suggested appointing one more commission to decide on the issue. "It means the government does not want to give reservation to Marathas."

Similar is the case with Dhangar community where Mumbai- based Tata Institute of Social Sciences (TISS) has been given the deadline to submit its report by the end of 2018.

"It clearly shows that the government wants to delay the decision in this regard," Munde claimed, adding that the present government is also opposed to giving reservation to Muslims.

On serious allegations levelled by the chief minister against the opposition as part of the election campaign, Munde said "I want to know whether they (government) are going to investigate these charges.

"By negotiating for BMC mayor's post, the CM is trying to save the BJP government in Maharashtra," Munde claimed when asked about Fadnavis's decision to withdraw from mayor's race.