The officials said that the Railway Police Force were asked to not use force to diffuse the rail rokos on Wednesday as well as Thursday. 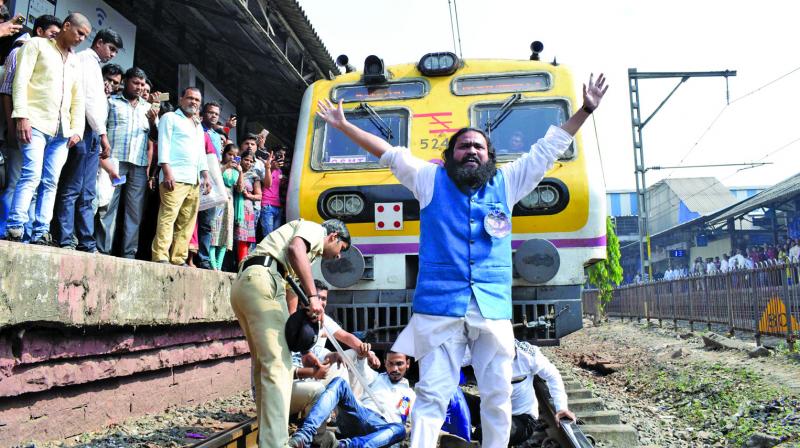 A police official tries to remove protestors from the tracks. (Photo: Deepak Kurkunde)

Mumbai: A three-minute rail roko protest was undertaken by Dalit protestors between 11.36 am and 11.39 am in Thane on Thursday. Following the incident, the participating protestors were detained by the police. Belonging to the Dalit Panther Youth party, the protestors were demanding immediate action against those who had orchestrated the violence during the bicentennial celebrations of the Bhima-Koregaon battle in Pune.

Central Railway (CR) chief public relations officer Sunil Udasi said, “The trains were halted only for three minutes and there was almost no effect on other services as a result.”

“We strive to provide the best facilities to the public and hope to continue doing so,” he added.

The CR saw around 14 rail rokos on Wednesday on the account of the bandh and saw the biggest of all of them between Chhatrapati Shivaji Maharaj Terminus (CSMT) and Thane for three hours.

The officials said that the Railway Police Force were asked to not use force to diffuse the rail rokos on Wednesday as well as Thursday.

The Western Railway (WR) on the other hand did not see any rail roko protests on its line.