The massive blaze was caused by an alleged short-circuit in the outdoor unit of the flat's air-conditioner. 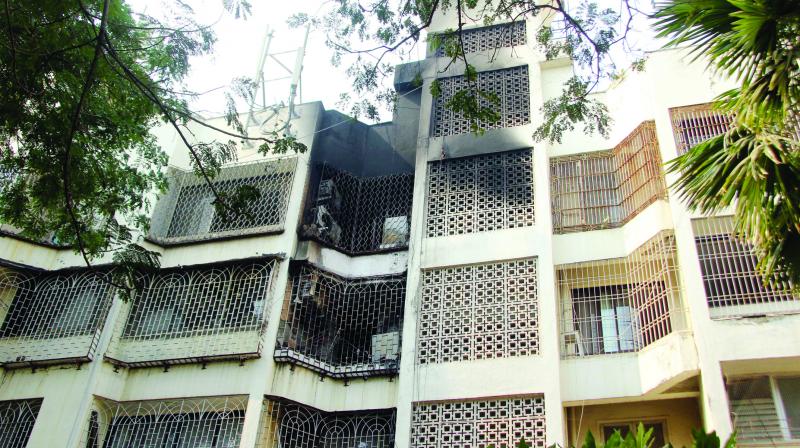 The Maimoon Manzil building in Marol

Mumbai: Four people, including two children aged 10 and 14, died while five others were affected after a third floor flat of a residential building, Maimoon Manzil, in suburban Marol, Andheri east, caught fire early on Thursday. The massive blaze was caused by an alleged short-circuit in the outdoor unit of the flat's air-conditioner. The blaze started at around 2 am, while the fire officials reached the spot 45 minutes late since they were attending a fire call in Sakinaka. Residents and fire officials revealed that there was a power cut in the area before the blaze.

“The cause of the fire, prima facie, seems to have been a short circuit in the flat’s air-conditioner. The fire incident has been reported to the police for further detailed inquiry. The fire department is probing the issue too,” said Kailash Hiwrale, Deputy Chief, Fire Brigade. Among the deceased were Sakina Kapasi (14), Mohin Kapasi (10), Tasmim Kapasi (42) and Daud Ali Kapasi (80). Around 17 people were rescued, of which five were rescued from the fouth floor and were shifted to the Holy Spirit Hospital. “So far it is understood that the fire emanated from the AC unit. However, we are awaiting a report from the fire and electricity department to come to a conclusion,” said a senior police official present at the site. The police has registered an Accidental Death Report (ADR).

Meanwhile, residents of Shivaji Nagar, an adjoining locality, revealed that there was a power cut in the entire area for 15 minutes before the blaze. "As far as I know, the blaze erupted when the power was restored," said the watchman of the building.

Three fire engines and ambulance were used to douse the fire. Fire officials claim that the fire was doused in five minutes. However, residents allege that the delay by the fire department led to the loss of lives. "We had two fire calls at the same time. When the fire engines were rushed to Sakinaka for dousing a fire, we received a call from the Maimon building. Thus, fire tenders from the Dindoshi fire station were called to attend the fire call," said a senior fire official from Marol fire station. It is to be noted that the Marol fire station is just at 10 minutes away from the Maimon building.