Kapsi saved as he had stepped out of the flat to figure out the cause. 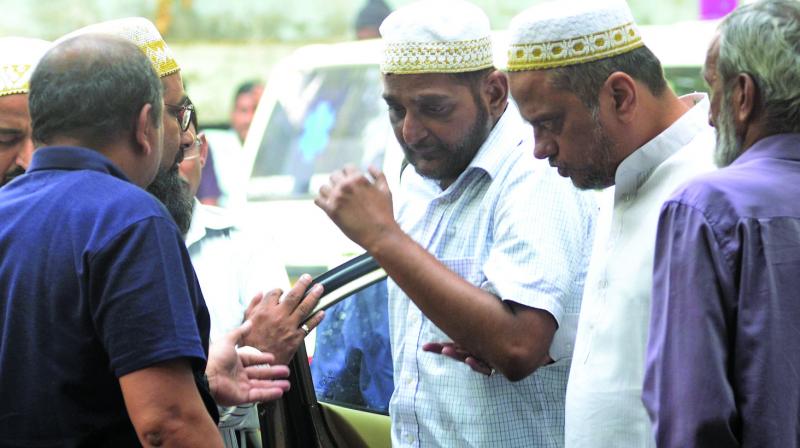 Abbas Kapsi, the man who lost his family in the fire.

Mumbai: Chartered accountant Abbas Kapsi, the owner of the third floor flat of the residential building Maimoon Manzil in Andheri that caught fire early on Thursday, lost four of his family members in the blaze including his two children aged 10 and 14, his wife and his father. Kapsi was saved from the fire’s fury as he had stepped out of the flat to figure out from where smoke was emanating.

It had seemed to him that the fire was coming out from flat’s AC unit’s outdoor unit and had therefore exited the house. The moment he went out of the flat, its main door got locked, leaving Kapsi stranded outside. The deceased, included Sakina Kapasi (14), Mohin Kapasi (10), Tasmim Kapasi (42) and Daud Ali Kapasi (80). The family used to reside on the third floor of the four-storey building. Five members of Kothari family who resided on the fourth floor were also affected by the blaze.

“Abbas was in the living room when the fire triggered. As soon as he saw the smoke, he walked out to know from where the smoke is emanating. The door got closed by the time when he walked out, and it was centre locked. He tried to get in and also asked help from neighbours, but he couldn’t save his family,” said Batul Namani, a relative of Tasmim.  Meanwhile, locals alleged that few men were ready to go in and save the trapped people inside the apartment but the security guards prevented them to enter the premises. “We saw the fire engulfing the whole apartment. We wanted to rescue but the guards waited till the fire brigade arrives,” said Santosh Enge, a resident.

The fire which spread out allegedly through the AC unit affected Kapsi’s daughter Sakina at first who charred to death with 100 per cent burn injuries. Tasmim, with her son Mohin ran to the bathroom when the blaze began to spread. According hospital reports, both died due to suffocation.  Meanwhile, 80-year-old Daud Ali, father of Kapasi also died because of 100 per cent burn injuries.