Blaze started around 6:30 pm on Monday in an open plot near an IT Park along General Arun Kumar Vaidya Marg, located adjacent to Colony. 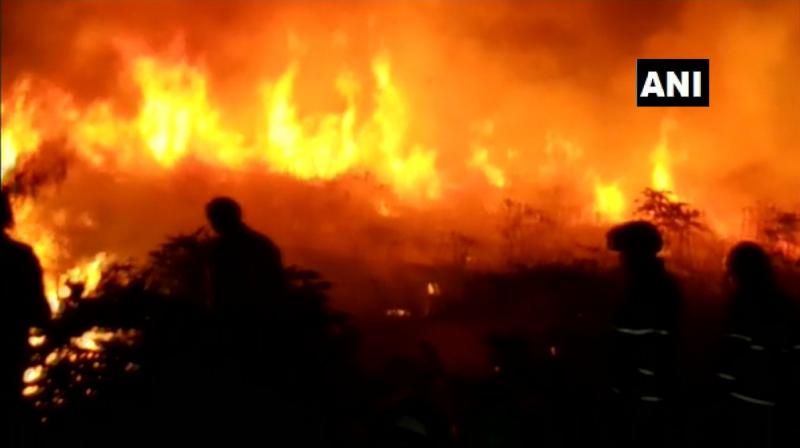 Mumbai: A major fire erupted on Monday near the Aarey Colony forest in suburban Goregaon in Mumbai, triggering an alarm as various agencies scrambled to douse the flames that threaten to affect the tribal residents in the city's biggest green lung.

News agency ANI reported on Tuesday morning that the fire had been doused.

Fire department officials on Monday said that their attempts to contain the blaze was being made difficult because of winds coming from the hills that were aiding the fire and that it was spreading to nearby residential areas. Mumbai's famous Film City occupies part of the Colony, which is located off the Western Express Highway.

Chief Fire Officer Prabhat Rahangdale said the Disaster Management Control Room has been directed to inform all police stations surrounding the forest to prepare to evacuate tribal residents and cattle if the need arose.

The blaze started around 6:30 pm in an open plot near an IT Park along the General Arun Kumar Vaidya Marg in the western suburb, located adjacent to the Colony.

"Fire personnel are trying to put out flames with 'beaters' — the branches of trees that are being used to create a fire break, as they have no access to fire appliances," the officer said.

He said the fire started spreading towards residential areas such as New Mhada Colony near New Dindoshi Green Hill Society in Goregaon (East) towards night.

"Until 7.30 pm, the blaze remained confined to trees, dry leaves etc. within a distance of 3-4 km from the spot of fire. However, in the night it started moving towards the residential localities," he said.

Aarey Colony, which is spread over 16 square km, includes 12 villages. Rahangdale said fire vehicles were unable to enter the forested area due to lack of access.

"However, we managed to put two small hose lines into operation," he added.

"Fire brigade has also roped in forest staff and volunteers to put out the flames using tree branches," he said.

Rahangdale said the fire appliances were diverted from the Film City to douse flames.

"A total of 10 fire fighting engines, seven JTs, three Quick Response Vehicles have been pressed into service. Apart from fire personnel, forest officers and Mumbai police personnel are also helping in putting out flames," he said.

"Many big fire pockets that are located at far distance (in the forest) are brought under control with the help of fire beaters. In such forest fires, open uphill wind results into rapid spread," he said. Four fire appliances and a jumbo tanker were kept on standby till morning.