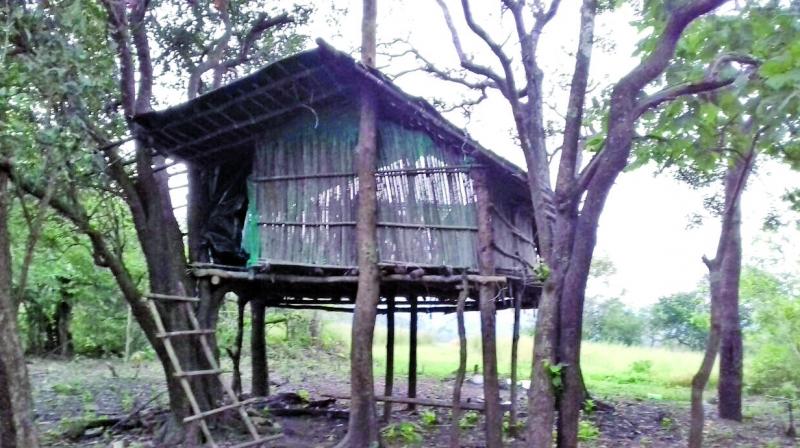 Huts have been set up at three spots in and around the national park.

Mumbai: In order to deter production of illicit liquor and keep an eye on poachers, the Sanjay Gandhi National Park (SGNP) officers have come up with three observatory huts at the highest point of the areas in and around the park. A team of officers patrol the areas on a rotational basis in two shifts. This will, according to officials, also help control forest fires.

The huts have been set up at three spots in and around the national park. A team of five officers will be deputed in these huts called ghanikhachar during the daytime while twice this number will patrol the area at night.

Speaking to The Asian Age, the recently appointed chief conservator of forest of SGNP Ahmed Anwar said, “We came up with the idea to make ourselves available for any kind of emergencies. These huts are located in the core forest area where a team will patrol the spot 24x7 so that prompt action can be taken in case of a forest fire or if poaching and illicit hooch making cases are detected.”

An officer posted in one of these spots said, “Our duty is to patrol the entire area and provide help in case of a forest fire which is one of the most common problems faced in the forest land. There have been cases of suspected poaching and illicit hooch making cases too in the past.”

According to senior officials in the National Park, the newly-appointed CCF of the park has initiated a new and an advanced system to deal with forest fire, which will be introduced and put to action by February 2017. “February to November is commonly considered to be the fire-prone period and this season we will be able to use the new system in the park as against the current way of dealing with it.”

Past incidents:
In December 2015, a five-year-old leopard’s body was found on the Shilonda trail in Sanjay Gandhi National Park (SGNP) and officers suspected it could have been a case of poaching as the preliminary post-mortem conducted by Mumbai Veterinary College doctors showed six injuries on the leopard’s right flank. Similarly, alcohol-brewing units (ABU) were reported to be operating illegally on the park premises. Nearly 20 illegal ABUs were seen to be in operation at different spots in the jungle. The majority of them were found near Vihar Lake and the forested patch around Saibhangoda and Maroshipada, which are both near Aarey Milk Colony on the perimeter of SGNP.