Demands plan to save horses that haul Victoria carriages despite High Court ban. 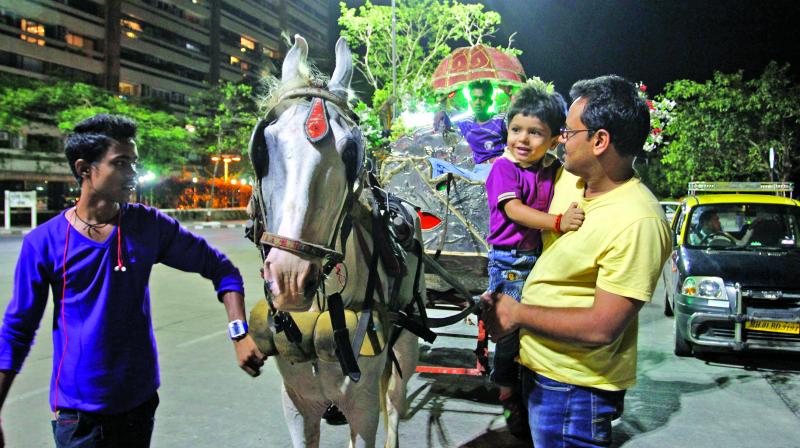 In July 2015, the high court banned the use of Victoria carriages in Mumbai.

Mumbai: The Animal Welfare Board of India (AWBI) has asked the state government to come up with a rehabilitation plan for horses that haul Victoria carriages in Mumbai at the earliest, to curb mistreatment of such animals despite a high court ban on them since July 2015.

Members of the People for the Ethical Treatment of Animals (PETA) conducted a survey with the Mumbai police’s assistance and examined six horses that are used to haul these carriages. PETA noted that the horses were being treated miserably, and approached the AWBI. The AWBI, in turn, wrote to the state government, asking it to submit a plan for the rehabilitation of these animals, so that Victoria carriages can stop running in Mumbai.

Following this, the state Cabinet appointed a sub-committee last week to review the proposal for rehabilitation of these animals, and animal rights activists hope this will be done soon.

In July 2015, the high court banned the use of Victoria carriages in Mumbai, and gave carriage owners time till July 2016, to phase out their use. The court also directed the state government to come up with a rehabilitation plan for these animals. Until the plan was drafted and passed, the horses would continue to remain with their owners (carriage drivers) as there is no other law in place to prevent their use. The court also gave seven deadlines, and November 2015 was to be the deadline to propose a rehabilitation plan. None of the deadlines have been met yet.

The court order also made a provision for any citizen to point out ill treatment of these animals to the state or the Mumbai police. Members of PETA independently examined some horses and found them to be in very bad state. They then asked the Mumbai police for help, and six horses were examined.

The horses had several scars on their body, which were concealed with lime powder, as most horses are white. The horses were severely malnourished, and had protruding pelvic bones and rib cages.

Dr Manilal Valliyate, director of veterinary affairs, PETA, said, “We had to take the police’s help, because the moment we approached a carriage to examine it, the others dashed away. So, police support helped us a great deal, as owners can be booked under the Prevention of Cruelty to Animals Act (PCA) by the police. Following the Cabinet’s letter that a sub-committee has already been appointed, we are hoping the issue will be resolved. Otherwise, we will seek legal recourse.”