On Sunday, Singh’s father Hridayanarayan Singh and brother Nirmal Singh spoke to media in presence of their lawyers Vinay Nair and Ashish Rai. 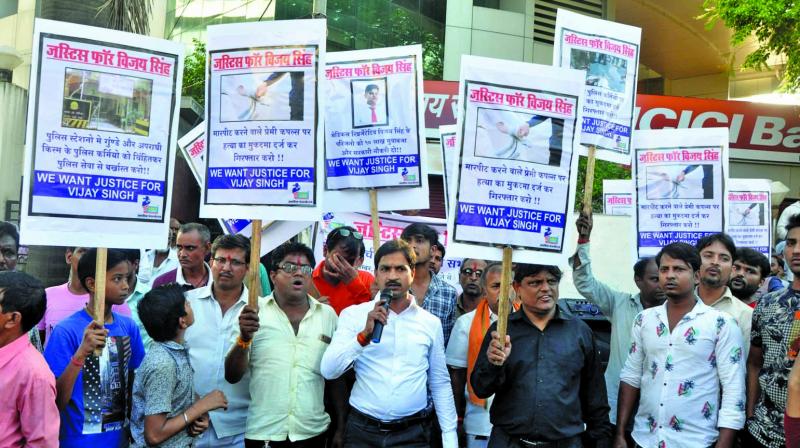 Mumbai: The family of the 25-year-old man who allegedly died in custody of Wadala TT police station demanded the arrest of policemen, even as officials sent the victim’s viscera samples for forensic analysis at state laboratory at Kalina.

The deceased, Vijay Singh, a medical representative in a private firm, died on the police station premises on October 27 following which the investigation into his death was handed over to the Mumbai crime branch amidst uproar of family members and locals.

On Sunday, Singh’s father Hridayanarayan Singh and brother Nirmal Singh spoke to media in presence of their lawyers Vinay Nair and Ashish Rai.

The victim’s father said, “The police’s approach was casual and they went on to say that they did not have petrol to take him to hospital when he complained of uneasiness.”

The family has been demanding arrests of sub-inspector Sandeep Kadam, assistant inspector Salim Khan and three constables, who allegedly showed lackadaisical attitude leading to Singh’s untimely death. The officials are also trying to find the reason of the policemen showing complete disregard to what Singh and his friend said.

The crime branch is in the process of recording the statement of the accused police personnel who were on duty when Singh was brought to the police station.

Singh collapsed inside the gate of the police station and was rushed to Sion hospital by family without any help from the police.

He was declared brought dead by the doctors. The Forensic Sciences Labora-tory’s toxicology department will submit the report in 10 days, which will also be used as evidence in the case, crime branch officials said.