‘No efforts made to sedate Avni’

Activists claim that tigress killing was in violation of apex court order. 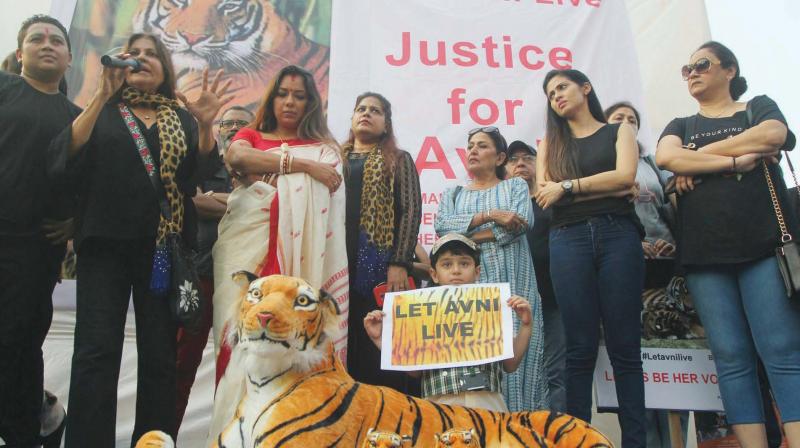 The high court, in September, allowed the forest department to tranquillise or shoot the tigress, T1 of Yavatmal region.

Mumbai: Activists and wildlife enthusiasts have stated that the shooting of tigress T1, also called as Avni, on Friday night is a violation of the Supreme Court order as enough measures had not been taken to tranquillise the tigress who was shot dead on sight.

Several wildlife activists also doubted the ‘man eater’ label to the tigress, as it did not meet the criteria of the same according to the National Tiger Conservation Authority (NTCA).

The T1 tigress, that had allegedly killed 13 persons in the Pandhark-awada forest of Yavatmal district, was being hunted for last four months. Since the shooting-order for Avni was issued by the chief wildlife warden, A.K. Mishra on Septem-ber, there have been str-ong protests from citizens against killing of the tig-ress, who was mother of two ten months old cubs.

“We had time and again urged the forest department to explore the option of tranquillising the tigress. The killings that occurred by the tigress could be instances of ‘chance encounters’ as the grazers were found inside dense forest. It meant that human encroached upon the space of wild animals. Moreover, there were no efforts taken to tranquillise the tigress. Neither a vet was present at the site when the shooting took place,” said Dr. Jerryl Banait, wildlife activist, who had filed petition in the apex court against the shoot on sight order.

Wildlife organisations have also asked for proper investigation in the matter. Many eyebrows were raised when a private poacher was called for shooting the tigress, where wildlife enthusiasts highlighted that it could mean clearing way for further development work in forests.

“Avni was killed illegally, in possible contempt of court and in apparent violation of the Wildlife Protection Act and the NTCA. This matter must be investigated and treated as a wildlife crime,” said Nikunj Sharma, associate director of policy, PETA India.

Meanwhile, forest officials have refuted the claims of deliberate shoo-ting of the tigress stating that since September, various measures have been taken to capture the tigress and not instantly shooting Avni.

“We have brought elephants, deployed drones and called expert trackers to find the tigress but it did not yield anything. We had decided to nab her alive, but the sight was not clear in the dense forest due to darkness. So we were unable to get a clear view of it and when a bullet was fired, tigress fell on the spot. We rushed her to the hospital but she was already dead,” said a senior official from the forest department.